Marketing stunts have gone from the sublime to the ridiculous this World Cup, but this is the first one we’ve seen that really makes you go ‘Woah!’. 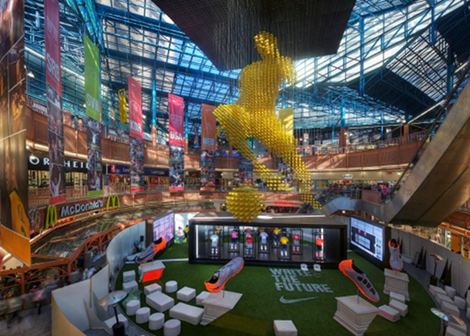 Nike has unveiled a giant ”Ball Man” Ĺ› a giant 21 meter high footballer made from 5,500 half-size footballs and weighing more than 4.5 tons – suspended from the atrium of the landmark Carlton Centre mall in Johannesburg, South Africa.

Ball Man was developed using a 3-D image of a player and then aligning each of the 5,500 skills balls to create the giant spectacle that dominates the atrium space. Strung together by over 10 kilometres of cable wire, and suspended from the atrium˘ ceiling, the installation took a full three weeks to put up.

Personally, we can’t look at the massive Ball Man for more than about 3 seconds at a time (it makes our eyes go completely mental) but what we can see is that it’s a mind-blowing piece of engineering – we’d love to see it in person!

Our favourite bit of the sculpture? Well – as much as we love the Ball Man, we’d love to have one of those Sofa-Sized’ Nike Elite Series football boots that surround him here at the Footy-Boots.com office!