At the half way stage, we’ve had over 1,200 votes on which is the best Power Boot of the generation, and the Predator_X is just inching it by 3% of the votes over the Laser III.

If you’re a Laser III fan you’ve got until next Friday to try and swing it Nike’s way before the Poll closes.

As for team Predator, you’ll have to watch your backs, as a mere 45 votes would see an upset!


Team Puma: Where are you guys? The PowerCat is a phenomenal football boot, so it must have some more fans out there somewhere!

It is a phenomenal time to be a player who loves power. Here we are in March , and already the 3 biggest brands have been making their presence known with 3 new football boots in the last 5 months. We’re spoilt for choice!

So, we’ve decided to take stock of the last few months, and give you a chance to tell the world which is this generation’s most potent powerhouse! We’ve got a run down of each football boot below to help you make up your mind, with the FootyBoots Power-Poll at the bottom of the page for when you’ve decided.

We said we were spoilt for choice, well now it’s time to choose!

The reigning King of Power, the Predator_X has a lot going for it, new Taurus Leather upper, improved low-profile strikezone and fantastic fit are all reasons why this should be the best Predator yet. But it’s taken a while for amateurs and professionals alike to accept this as a worthy successor to the mighty PowerSwerve range, and some Pro’s have even been spotted with the Powerswerve’s Soleplate on the new Predator_x upper – controversial! 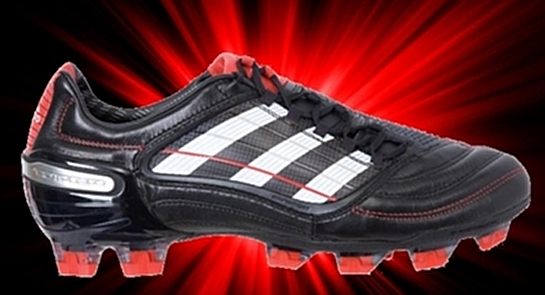 Best Soft Ground Traction of the Three:-'  Uniquely-shaped studs make them the best in this category for grip.

The New Powerspine:– There are many claims made by football boots to ‘boost’ this and ‘enhance’ that, but the Powerspine offers something tangible; it stops the foot bending back as much when striking the ball.

Maybe Not As Good as the Powerswerve?:– Adidas will tell you that the Predator_X offers a 7% increase in power over the Powerswerves, but many players are still wearing the older model.

Should Adidas have kept the PowerPulse system?:- Eagle-eyed Footy-Boots fans have got in touch to say they’ve seen the likes of Anderson and David Beckham playing in Predator_X’s with the PowerSwerve soleplate – clearly that 5g of Tungsten powder was loved by pro’s'  – was it a mistake to get rid of it? 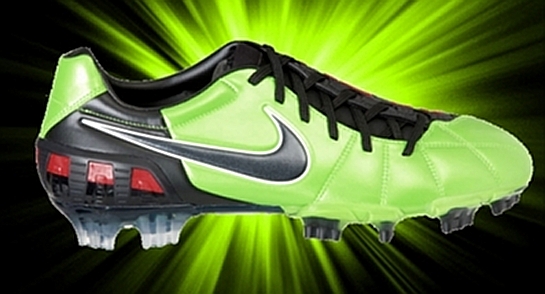 The Laser III was released to much controversy, getting rid of the radial rings that served as the hallmark of the Laser range upset a lot of fans and then launching it in an Electric Green/Red/Black colourway was like salting the wound! But since then, the popularity of the Nike boot has been boosted by the unstoppable form of Wayne Rooney who has championed the boots (in the original luminous green) since their launch.

Great for Swerve:- The Laser III has rubber fins to increase friction which is designed to increase accuracy and swerve.

And for Power:'  Nike have also added firm silicon pods to give the boot a smooth surface to strike the ball with, increasing power.

Memory foam: Making the leap from the successful CTR360, Nike have added memory foam to the toe and tongue of the boot, to ensure the striking area is as close to the foot as possible.

Does It Try To Do Too Much?:- The design of the boot makes it something of a Jack-of-all-trades, with many fans of the Laser range wishing the boot was still a more focused Ace of Accuracy & Power
Colour & Design not For Everyone:-'  We quite like the design, but many of you guys left comments on our reveal of the boot basically saying ‘It’s a bit all over the shop’!! 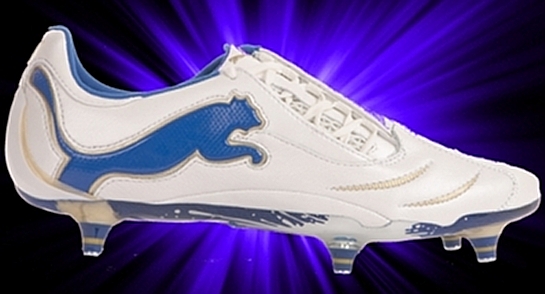 The newest boot to enter the fray, the Puma PowerCat is a replacement for the V-Konstrukt series. Taking the focus away from player protection and putting it on Power and Accuracy was a bold move for the German brand – Now is your chance to vote and tell us if it’s paid off!

3DPST Is a Great Piece of Tech:- Working in a similar fashion to the old Laser rings, or a really stripped down Concave SweetSpot, 3DPST gives you a big firm surface to strike the ball from

Best Upper of the Three:- Puma have really nailed the K-Leather upper on this boot, it’s soft, durable and with plenty of give for players with wide feet.

Arguably the Best Looking of the Three:- The two colourways that Puma have released have been classics, solid main colours, using the secondary colour to highlight the technology.

Why drop the DuoFlex Power system off the V-Konstrukt?:- Markedly similar in theory to the Predator_X’s Powerspine, DuoFlex was the best feature of the V-Konstrukt, here’s hoping Puma bring it back for the PowerCat 1.12!

Where are the Power Players?:- Adidas have Steven Gerrard, Nike have Wayne Rooney, Puma really need a powerful player to endorse these boots to get the brand out there!

No Increase in Friction for Accuracy:- Both the Laser III and the Predator_X have areas to increase friction for improved accuracy and swerve, but Puma’s latest does not.

So, you’ve got all the facts – and we know you’ve got an opinion! Just click below to place your vote for the best Power boot of 2010, and we’ll post the results next week! [poll=33]

In the mean time; why not leave a comment below to try and convince some undecided readers, or shoot us a Tweet and let us know what you think!