It’s that time of year again, where we celebrate the best of the best in the annual Football Boot Awards.

Now into it’s 6th year, the Footy-Boots.com Football Boot Awards have become the hallmark for fans to let the industry known what they want from a football boot.

Celebrating award-winning design and ground-breaking innovation, the Football Boot Awards are the only event of their type, where all the voting is handled by the people who matter – the fans.

Broken down into five categories, here’s how each of your votes will count:

Football Boot of the Year

The Big One. The biggest boot releases of the last 12 months go head-to-head for your votes.

It’s the most coveted award of its type within the football industry and your vote could be the difference between an underdog victory, or one of the big guns claiming the crown. No pressure!

Bold designs have become a hallmark of the modern football boot.

Brands vie for attention on the feet of professionals as fiercely as they do on store shelves – the Best Looking Football Boots of the Year award is a tip of our (undoubtedly extravagant) hat to the boots that push the boundaries of good looks, and – in some cases – good taste!

Safest Football Boot of the Year

Safety has rightly become a paramount concern for footballers over the last decade.

After coming under fire for everything from bladed soles to lightweight uppers, the Safest Boot Award allows us to applaud the efforts of the brands who go the extra mile, so we can go the extra yard!

Most Innovative Football Boot of the Year

Year after year the best football boots in the world try to take the beautiful game to the next level, with innovation that stretches the imagination.

By honouring the Most Innovative Football Boots of 2011, we acknowledge the cutting-edge creativity that not only makes headlines here on Footy-Boots.com, but makes that all-important difference on the pitch.

Football Shirt of the Year

Every fan treats their club’s colours with an unparalleled amount of reverence, and truly takes pride in a uniform for their team that does the same.

The Football Shirt of the Year has to be one that epitomises what it is to wear the jersey of that team and combines it with cutting-edge performance features. 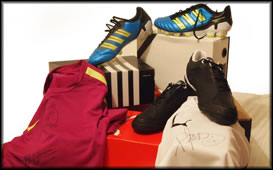 We’d also like to use the Football Boot Awards as a way to give something back to you all for your support over the last year, so we’ve racked up a mountain of prizes from our friends at Umbro, adidas, Lotto and Under Armour – not to mention our official awards Sponsors Kitbag.com and WorldSoccerShop.com.

So, after your votes make sure you leave us your email address, as anyone that has already voted will be the first to be alerted to any giveaways!

So, what are you waiting for? Head over to the awards microsite now, and get voting!