Theo Walcott and Peter Crouch launched The FA Mars Just Play programme earlier this week – a partnership between MARS and The FA that aims to arrest the decline in organised adult football by providing a new format of football and online tool to help adults find football near them. 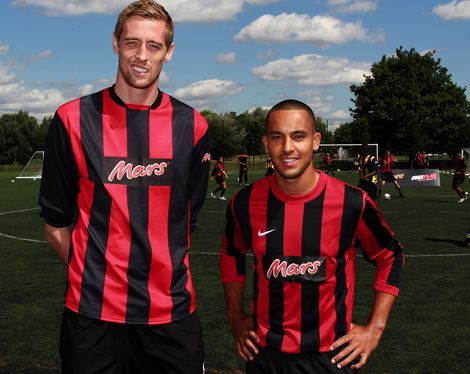 The partnership is aiming to get 150,000 new participants playing the game for at least 30 minutes a week by September 2013, and deliver a total of 3.9m hours of extra football played each year throughout England

The launch took place in Camberwell at one of the first Just Play Centres, which will host kickabouts up and down the country from this week. The FA and MARS are opening 44 Just Play Centres across England this week and over 100 by December 2011 with more planned for 2012 and beyond. Each centre will be staffed by FA Mars Just Play Organisers, delivering casual football that can benefit up to 50 participants at any one time.

From this week, people will be able to sign up to The FA Mars Just Play website by searching online for œJust Play. The website will feature a search engine that allows subscribers to find their nearest centre for a kickabout, join an 11-a-side game or team in their local area, or search for a 5-a-side provider.

The FA Mars Just Play Kickabouts are designed to inspire adults to play regular, accessible football in any form no matter what their level of experience and ability is. The new initiative will help The FA and MARS tackle the challenges that face adults head on, by connecting footballers all over the country, and delivering facilities and Just Play Organisers at affordable prices.

Peter Crouch, MARS ambassador for The FA Mars Just Play programme, said:
œWe love football in this country but loads of people are put off playing because they don’t have time, can’t find good facilities or enough people to have a game with.

œThe great thing about this scheme is that it will make it easier – no matter what your level or where you live, ‘Just Play’, and remember why you love the game so much.

The programme is part of The FA™s National Game Strategy, a £200 million pound investment into grassroots football and is the latest milestone in MARS™ ongoing investment in football, having spent £48 million on the promotion of the sport since the 2006 Believe campaign. MARS™ work within the national game is part of a wider commitment to get the nation active through playing football.

According to Sport England™s research1, the number of people playing regular grassroots adult football in England is declining due to a lack of facilities, increased apathy, inflexible football options and logistical difficulties that hamper entering the game.

So, have you got a pair of football boots in your cupboard, gathering dust?