After a two eyeball-scorchingly bold launch colourways, the new Superfly III gets it’s first update in the colourway stakes with a more subtle Granite/Purple/White/Red colourway!

Marking the first time we can think of that Nike has used it’s ‘Granite’ (normally reserved for trainers) as the main colour for a pair of football boots – we reckon there’s a certain, almost ghostly, charm about this shade of off-white.

The Solar Red that we’ve seen on several pairs of Nike’s Nike5 range makes a welcome appearance on the Superfly III, offering a nice ‘Pop’ against the Granite.

We also know that these football boots look the business on the pitch as they’ve been spied on the feet of many stars as they prepare for Summer football tournaments.

In fact, despite the fact that this Superfly III is only being officially revealed today, we know that it’s been the colourway of choice for Neymar, Robinho and (to some extent) Sergio Aguero since the end of May!

As these sleek sleek football boots are a key part of Nike’s Fall range, not only will you see this colourway in action during the Copa America, Gold Cup and the MLS over the summer – it will also be one of the stars of the show when the 11/12 season starts anew in August – we’re already excited! 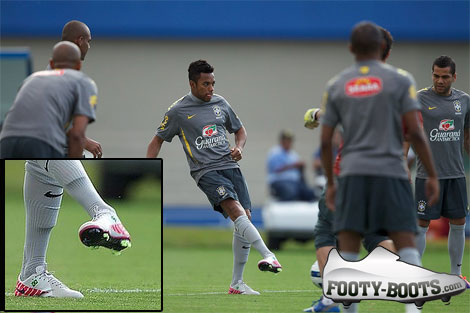 Some of the top stars in the World opt to wear the Superfly III, and we can’t wait to see the likes of Walcott, Lennon, Pato, Ibrahimovic, Pedro and Drogba in this great new Granite/Purple/White/Red colourway!

Expect to see the Superfly III – Granite/Purple/White/Red in stores from July 1st, priced at around £275.

SUPERFLY III – GRANITE PURPLE WHITE RED, 4.9 out of 10 based on 28 ratings https://www.footy-boots.com/wp-content/uploads/2011/06/SUPERFLY-III-GRANITE-PURPLE-WHITE-RED.jpg