Time to pull on your protective eyewear – we take a look at the lead colourway of Nike’s 2011' Superfly III football boots – Plum Red/White/Neon!

Continuing Nike’s trend of distinctive lead colourways for their football boots, there’s no doubt that the new Plum Red/White/Neon Superfly III is a contender for the most distinctive ever!

We’re not sure whether we’re getting used to Nike’s continuously flashy choice of colours for their football boots, or whether this is genuinely an improvement over ‘Violet Pop’, but we’re definitely liking this scheme much more than the Superfly II’s original colourway!

Which is just as well, as we’re about to see a whole lot of this colourway! As the main colourscheme for the Superfly III, expect to see it on everything from training kits to magazine adverts (as well as the football boots, obviously!), and one thing’s for sure – it’s designed to draw attention.

All Nike Superfly III colourways will follow a similar pattern to the Superfly II – one primary colour contrasted against an opposing secondary colour; in this case Plum Red and Neon Yellow.

The intention being that as a player runs the two colours flash against each other as one foot moves past the other, making the bolder colour of the two even more visible.

This effect means that it’s easier for a team mate to pick out a player wearing these football boots, potentially increasing the likelihood of a successful pass being made. 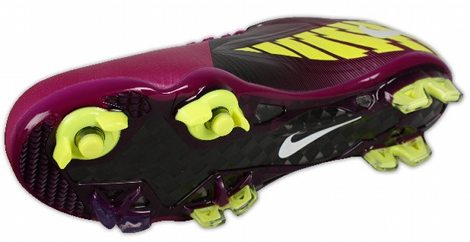 Whilst many are still to be convinced of the benefits of this visual technology, there can be no doubting that the launch colourway of the will make it exceptionally visible on the pitch, and will most likely catch the TV camera’s lens!

Set to be debuted by Cristiano Ronaldo and Mesut Ozil in the Madrid Derby on Saturday the 19th of March, the Superfly III will go on retail release from the 1st of April, priced £275.

What do you think of the main colourway for Nike’s latest football boots?

Let us know in the comments below, or use our patented boot-o-meter!

NIKE SUPERFLY III – PLUM RED/WHITE/NEON, 6.4 out of 10 based on 77 ratings https://www.footy-boots.com/wp-content/uploads/2011/03/NIKE-SUPERFLY-III-PLUM-RED.jpg