Wow! It doesn’t take some players long, does it? Chelsea star Didier Drogba was spotted by our ‘man in the field’ DDChile as he prepared for the last 16 clash FC Copenhagen in a custom pair of the unreleased Superfly III! 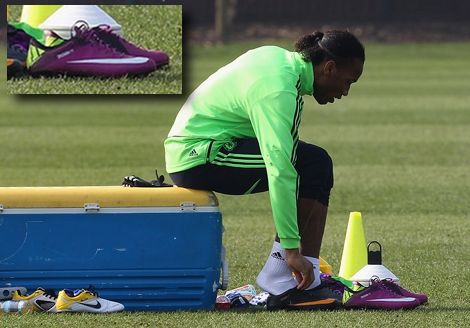 The prospect of seeing Drogba in the Superfly III was already mouth-watering enough; as one of the speed football boots key wearers, so it was only a matter of time before we clocked the big Ivorian in a pair of Nike’s latest creations.

Cited by Nike as one of the most important players in their football boots development, Drogba’s comments on high-visibility footwear that inspired the ‘flicker’ designs on the last two incarnations of Nike Superfly.

Training here in the Purple/Neon colourway (complete with ‘Drogba 11′ embroidery), we can presume that the’ Superfly III isn’t too far away from release – though we’re not expecting to see the Chelsea striker wear them at Stamford Bridge tomorrow night.

The most surprising thing about this spot, however, is that upon closer inspection Drogba’s studs are black instead of the neon yellow we saw on Standard Liege’s Franck Berrier at the weekend.

From this, we can safely assume that Drogba has had his custom soleplate put on his new Superfly III’s – which he exclusively revealed to Footy-Boots.com back in November is a carbon fibre replica of the FG sole from the Mercurial Vapor II – once again leaving the NikeSENSE studs ‘on the bench’, so to speak!

Seasoned football boots fans will probably be unsurprised by Drogba’s particularity when it comes to his cleats; whether it’s superstition or personal preference ‘The Drog’ has been known to wheel out a variety of football boots from his locker, seemingly at random, often playing in the much-loved Black/Black/Volt Superfly I’s despite them being well outdated.

The rest of the Chelsea squad were also in a whole host of Nike’s new releases, with Defender Alex back in action in the synthetic T90 Laser III in White/Black/Chlorine: 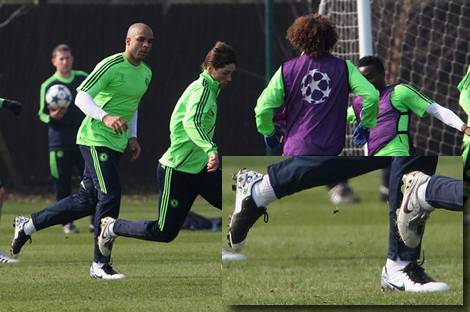 And both Ramieres and Josh McEachran getting to grips with the new White/Black/Tour Yellow CTR360 Maestri II. 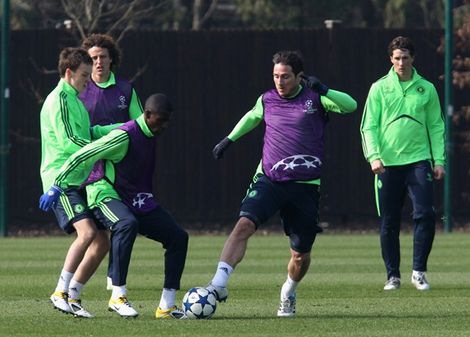 All in all, a great days football boots spotting at Cobham, we’re sure you’ll agree!