One of the joys of going to football boot launches is that you get to meet really interesting people. In the case of the Superfly II, we were lucky enough to spend some time in the company of Nike Design Director, Andy Caine.

Shortly after he’d appeared on stage to explain his thinking behind the new football boot, we spent around 20 minutes in his company, quizzing him on as many aspects of the Superfly II that we could think of.

The result is a fascinating insight in to what goes in to making a football boot like the Superfly II. 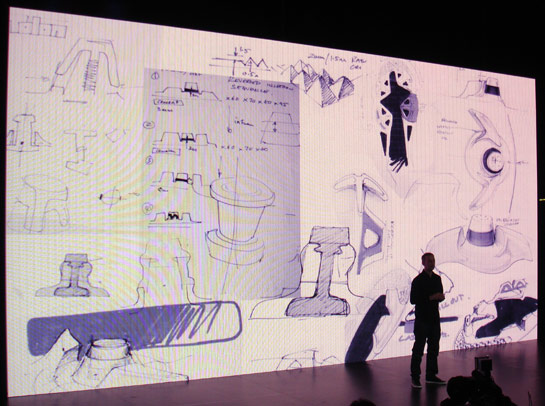 Andy, thanks for talking to us. First off, what are the big improvements on this Mercurial Superfly compared to the last?

The adaptable stud is really the revolution in this boot. The other features are about taking things we’ve done before – like the Flywire and improving it, taking traction on the plate and improving it. The real story is a lot of the traction elements; obviously the extending stud is huge, but equally important is the idea of the toe traction. It’s an area that, in football design, hasn’t really been addressed. You look at track spikes in other sports, a lot of other athletics use tracks on the toes to give you that extra last bit on the toe. So bringing that to football is also very unique.

The other thing that we’ve really evolved is the redesign of the traction pattern. More braking, accelerating – but also – these players are very creative and do a lot of different types of movement. So the traction pad is designed to give these creative, fast players the best traction in every type of movement that they’re going to make.

So, the Mercurial Vapor Superfly II’s extending stud extends 3mm – that sounds like nothing! Tell us more on why it can make such a difference?

Well, on boot like this – for a fast player, we know that the biomechanics of a player are going to make them really focused on the forefoot. If you speak to most fast players, like Pato, they will literally tell you I use [part of the foot] when I’m standing still. So, the position of these two studs is where they’re going to have the most impact, biomechanically. So as you’re ‘toeing’ off on that first step acceleration they’re positioned around there.

We measured [athlete’s feet when] accelerating, and most of the force on the boot is put on there. So – if you’re going to slip that’s when you’re going to do it. The studs are located in areas where slippage might happen, and stop it happening. 3mm is a big difference on a football boot, it’s not a small size when it comes to football. 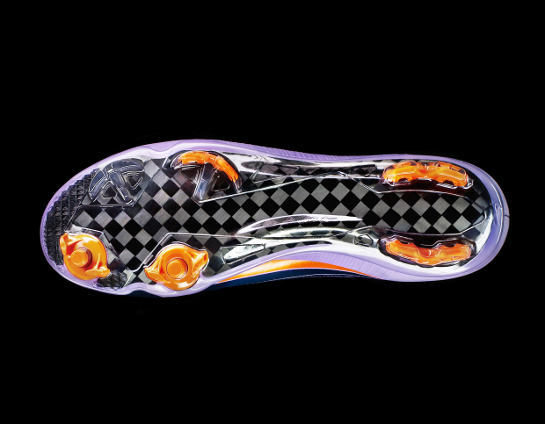 How does the stud work – does it interact with the surface?

It’s one-on-one with the player, and surface interaction reacts instantly. If it really requires a hard surface, it’s just a normal boot; but this is soft [points to the forefoot of the sole of the boot] and you put your foot in it and press it, it has the ability to extend.

Are you a footballer yourself?

Not as good as any of these players!

But did you try the Superfly II out?

Yeah, one of the things about being a designer is you’re naturally very curious about how it feels and how it fits. It’s part of your job to know how it feels on your foot. The new traction system also makes this the most comfortable Mercurial Vapor we’ve ever made – the pressure distribution is very equal across the bottom.

Go on, you can be honest with us; was the Colour choice anything to do with Cristiano Ronaldo?

No! The colour really comes from a little bit of science: the idea was we talked about this visual acuity idea, and purple we know from the balls, works with yellow – obviously the high-vis balls are yellow and purple. So we took that, as well as with a dark colour. So when you’re running you get this effect [‘runs’ the boots across each other, demonstrating the colour change from one foot light purple to the other foot being dark purple] and with that ‘bounced’ off the grass, you get what we call a ‘flicker’ which really engages accurate vision. So there’s a lot more science behind it that just picking a colour! 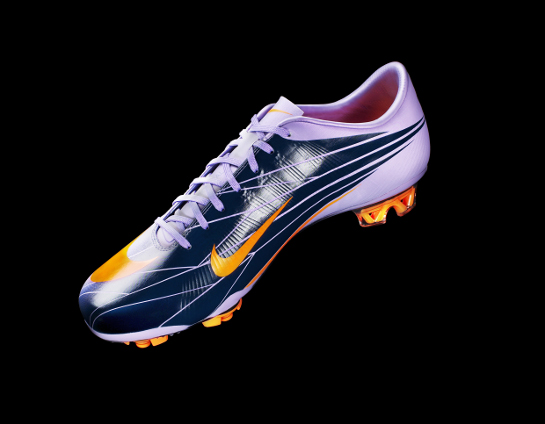 A lot of people are saying the Superfly I & II are very similar. If you blindfolded a player and asked him to try them both out, what differences would they feel?

They’d be surprised – as these [professional] players step in these boots a lot, maybe 4 to 5 hours a day training and such – everything you do in them you will feel, as these boots are much more fine-tuned than normal Mercurials. They spend so much time in these boots they would definitely feel the difference.

Were there any developments from the Superfly II from the I that were lead by a specific player?

Yeah, a lot of them were. We work with a lot of players and as said there were some very common themes that come out. The colour thing really came from Didier Drogba – his team mates were really noticing it. We brought it up with a lot of other players who’d worn that boot, and they backed up what he was saying. Drogba has a real affinity for understanding all the little things about football boots, and I think also Cristiano [Ronaldo] and Zlatan [Ibrahimovic] also have this approach to looking at boots that’s like ‘Hey – what if…’ that’s like they’re almost challenging us to say ‘If we could do something here – what would it be?’.

There are similarities between what players say, but there are also specifics, and Drogba comes to mind the most. Or you look at [Alexandre] Pato, who’s young and eager to try anything to be better, and so very demanding of what a boot can offer him to make him better.

Is there any reason that jumps out at you why traction has become so important?

If you look at the stats or just watch a football game – if someone slips if you’re a defender or attacker it’s a big thing. If you’re a defender and you slip then the attacker can get in. If you’re an attacker who slips then you lose your chance. So I think that’s really important – when you look at Ronaldo or Pato type players, they’re extremely fast and dynamic and get a lot of game-changing moments and you don’t want them to lose any of those moments.

Traction for them is super-critical. And part of the traction is the upper – it’s got to lock you in otherwise you’ll lose your efficiency, and that’s no good either. 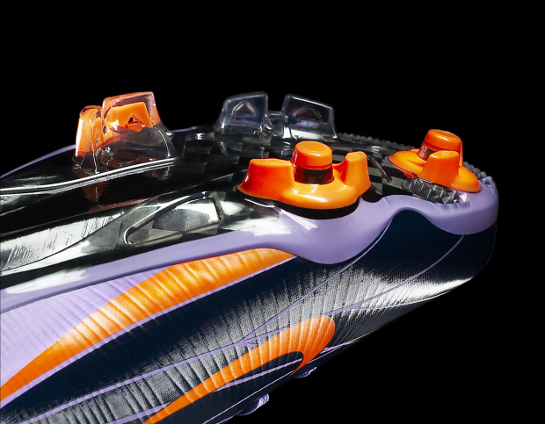 What’s the strangest request you’ve had from a player that you haven’t been able to incorporate?

And that’s why I spent 65 days last year travelling to meet these type of players, and they’re very busy people, so they respect that by working with us they can get a better product and become better players.

How many players were involved in your 65 day trip?

We’d never just go to one player, that doesn’t give you the breadth. We prefer to go to many players, see where the commonalities are, see what’s unique and if that’s something we can explore and see if that works out. You look for the things that are the most common, because if you improve that you help everyone.

As a designer, which of the new innovations are you most proud of?

The stud – if you understand industrial design and producing something that actually moves on a football boot – is beyond complex. We actually spent a lot of time and energy to make it work and to me; it is the be-all and end-all. I’m pretty stoked about that – but there is a lot more just on this boot in itself! The colour’s pretty cool, so I’m pretty pleased with how it turned out – it is a good evolution from the last model, pretty much a revolution from the last boot.

How has safety been considered on the Superfly II?

We’ve increased the durability of the boot, this composite upper construction is literally multiple layers and we’ve actually re-engineered it from the ground up, so the combination of the elements on the boot are more durable than we’ve ever had. But, interestingly, it’s actually less layers and lighter than we produced on the last Superfly.

We’ve done a lot of work in last few years on increasing durability, so protection is a key factor.

How long is a boot like this in development?

Depends on the silo, there’s different lengths to different products from Nike – it ranges from 18 months to around 4 years. It really depends on the market.

How about this incarnation of the Superfly?

We started developing it 2 and a half to 3 years ago.

How many prototypes have you seen in the development cycle?

A lot! Just as an example – on the upper alone -we made around 43 different versions of the upper to get the right one. Every one goes through the Nike Sports Research Lab (as mentioned in our Laser III coverage) so we slow motion film the testing of every boot – to ensure the foot is staying in the right place.

The studs, however, are made in 5 big steps – and there’s been a lot of changes to those steps! To create a football boot like this is very complicated – it takes a lot of time and a lot of testing, around 2 years of testing went into this boot.

Tell us more about the testing

We do all sorts of testing, like the lab testing,'  for durability; we’ll test how strong the boots are with puncture tests, pressure tests, we’ll to internal pressure tests and slow-motion filming, we’ll do traction testing and also on-pitch real life testing around the globe to get different perspectives, and we do that a lot.

I’m a designer, but we have a facility in Poland, which is really amazing and working with those guys and also biomechanical specialists looking at what we’re doing. So when you get the specialists saying they’re perfect, we’ll take them back again to see if we can get it even better. That’s why there were 43 prototypes – experts were saying they were good to go on around 35, but we took it back in to see if we could get it even better.

There’s a lot of testing that goes in. Football boots have to be worn, at the end of the day. Athletes are wearing them 3, 4, 5 hours a day 7 days a week – they have to be right.

When designing a new boot – what do you do on Day 1 of the process?

A lot of the start of the process is sort of having that vision, an idea of what you want to produce. So in this boot the vision was we wanted to create the fastest boot possible, but also take speed into the next generation. The idea of adaptability came from the first part of that brief.

Can you quantify how fast this boot makes a player in comparison to older models?

No, what we do is we have Ronaldo doing the speed challenge (part of the included Nike Football+ training) and time him across the challenge using electronic gating.

So what you’re saying is, you could have Ronaldo do the test in the old model, then have him switch to the new Mercurial Superfly II and he would be faster?

That’s the way it works!

Written By
Felipe
More from Felipe
Puma V1.08 gets a facelift with this new colourway Black, White, Olympian...
Read More