If you’re anything like us here at Footy-Boots.com, both the Nike Academy and the National Football Centre at St George’s Park are viewed in very similar ways; they’re a  concept, detached from the reality of football to Sunday League players like us.

In short, they’re places where people better than us go to play.

So, what happens when you transplant a casual player into the midst of some of the world’s leading coaches, sports scientists and fitness experts at the best footballing facility in the country? 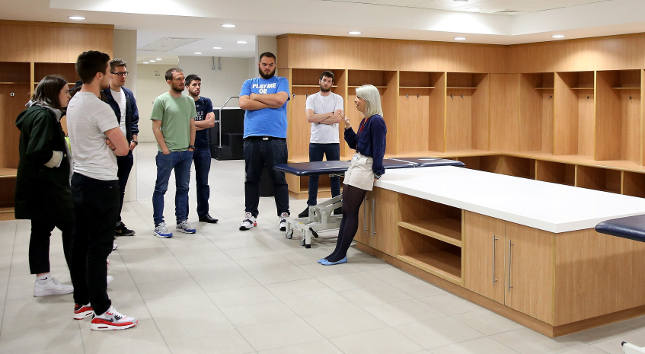 An early start welcomed us at St. George’s Park, kicking off with a tour of the facilities – a particular highlight was the Wembley-replica DESSO pitch; not just any old patch of grass, this training pitch is natural grass threaded with fibres to ensure consistency of bounce a speed.

It’s even vacuumed after every use. 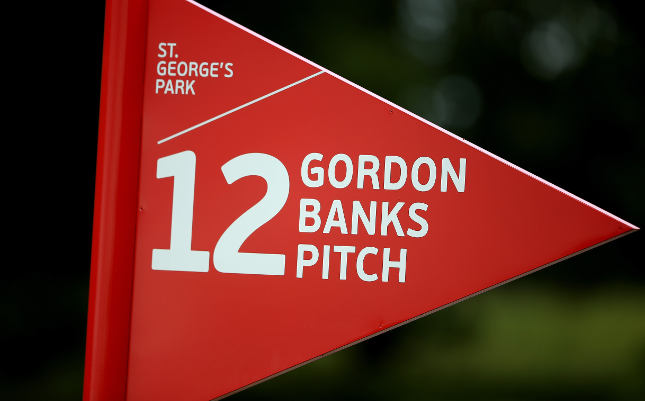 Reserved exclusively for England teams of all levels, the DESSO pitch wouldn’t be graced with Footy-Boots.com’s presence. Instead we’d be headed out to Pitch 12 – the Gordon Banks Pitch.

But before we graced the turf with our own brand of bandy-legged midfield genius, it was time to get kitted up.

A pair of Tiempo Legend V’s in the World Cup Volt colourway and the new GLX training gear awaited us in the locker room, as did Sam – a Nike ‘EKIN’ (as he has to know Nike back-to-front) – who ran us through the tech-specs of the Nike Ordem ball. 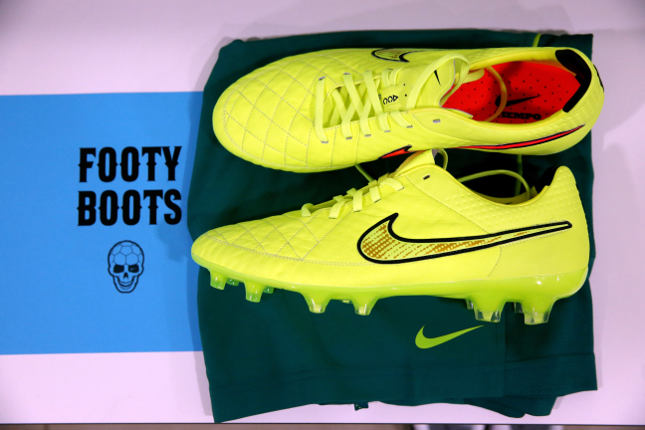 Taking the session would be coach Edu Rubio – assistant manager at the Nike Academy and with a CV boasting the likes of Chelsea and Valencia.

Edu and manager John Goodman’s philosophy is one of high-pressing, aggressive football based around partnerships.

Rubio draws us a diagram on the whiteboard, explaining the relationships that must be forged between every member of the team  – in particular the ones which create overloads in positions for the opposition –  before dividing the board into five segments and showing how the Nike Academy team share responsibility based on these key areas of the pitch.

It’s almost football-by-numbers, distilled into a formula that makes up how the Academy have claimed scalps from some of the world’s most famous academies and found professional contracts for his players at Santos, Hamburg SV, Nottingham Forest, Bolton Wanderers and more. 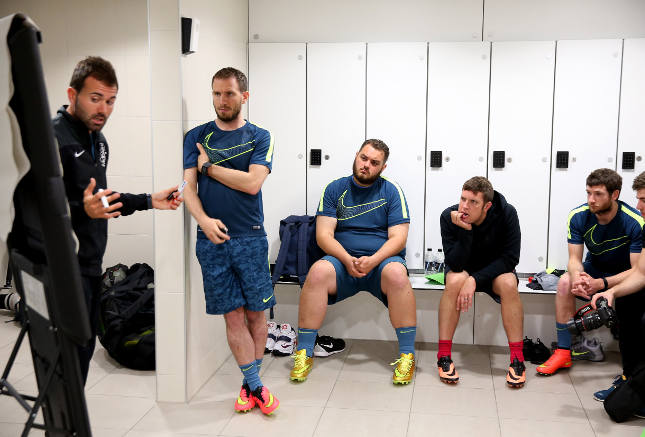 Out on the training pitch, it’s not enough that we do the drills; Edu insists we apply this philosophy in everything we do on the green stuff.

After a run-through, he’ll stop play, ask us questions (and encourage questions) on why we’re doing what we’re doing, what the end-game is and what the Nike Academy expects.

It’s challenging on every level; performing tasks that you’ve never done before and being asked to think not ‘What should I do?’, but ‘What does the team need me to do?’

You realise: this the difference between a team with great players, and a truly great team. 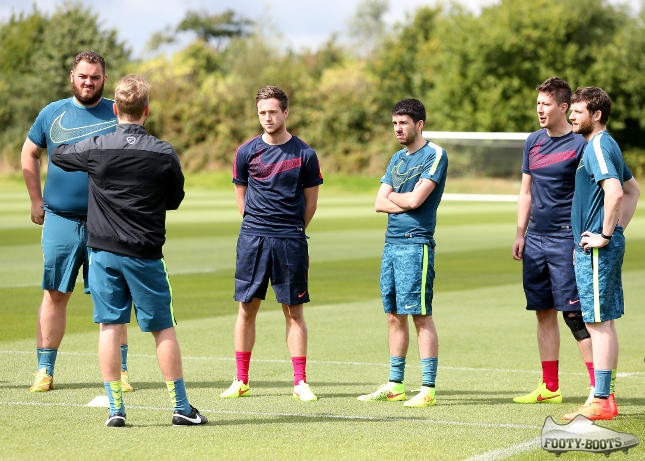 But individualism isn’t a dirty word at the Nike Academy; in fact, in one area, it’s the tag-line.

Strength & Conditioning is a huge part of the Nike Academy, and it’s bespoke for every player. It’s equal parts injury prevention and match preparation. Josh Dixon is in charge of our session, and he emphasises that what you do in the gym must be for you.

Josh explains that if you take two players of comparable technical ability, but one is putting the time in in ‘S&C’, it’s no contest who’s coming out on top – so imagine you’re facing that ‘arch rival’ at the weekend every time you rack up the weights for a new goblet squat or glute bridge. 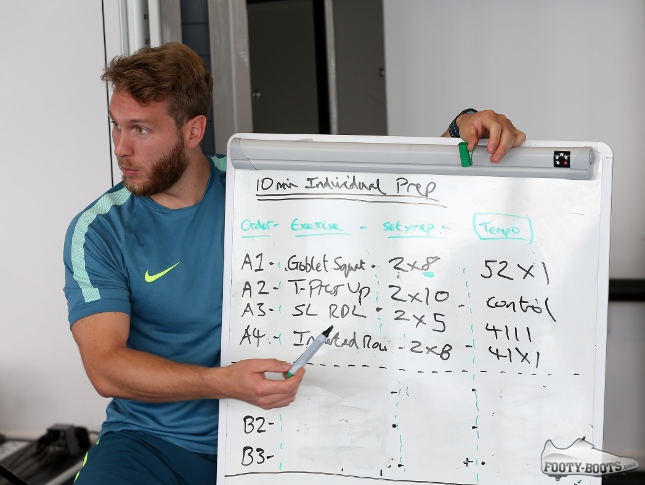 Needless to say, it’s brutal – Josh encourages us the same way he would the Nike Academy players, demanding correct form and emphasising tempo and control in equal measures.

Josh also boasts the same mindset as Coach Edu, encouraging questions be asked about form, benefit and muscle groups worked – he feels that players should be able to ask more of their coaches and staff, and it’s a good coach’s responsibility to give answers give players the assurance it’s worth their time and energy.

And after an introduction to the hydrotherapy pool, the gathered media were left asking ‘Why!?’. 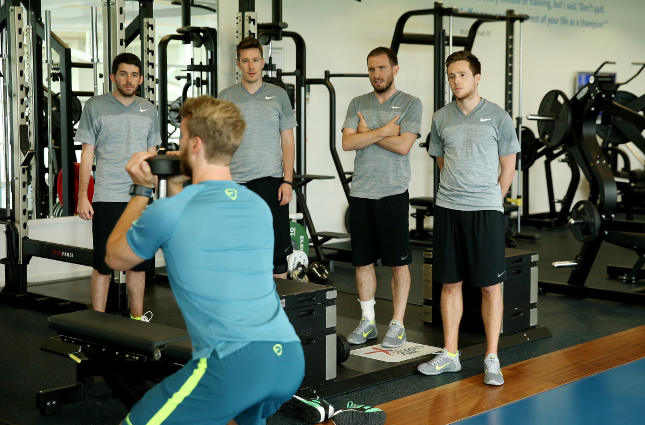 A chilled 12 degree pool (your average swimming pool is somewhere in the low-to-mid-30 range) is the modern alternative to the ice bath, giving the legs a deep, almost burning sensation in the muscles.

Well worth a dip after a match if you either i) need to be fit for an afternoon session ii) truly hate yourself. 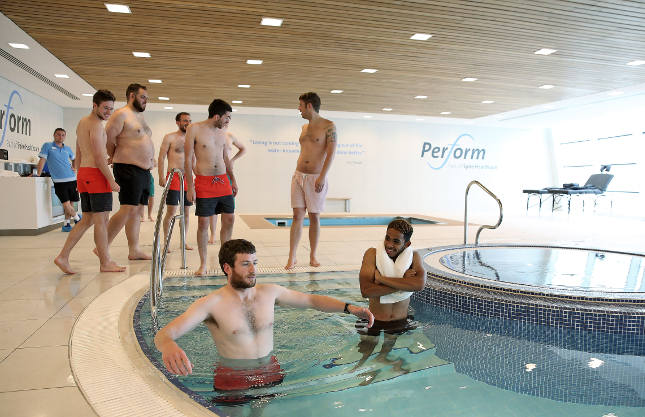 Needless to say, the whole day afforded an insight into that almost intangible difference that separates prospective pro’s from Sunday League chancers like us.

The Nike Academy is an incredible set-up, and St George’s Park is an undoubted game-changer for English football, with the players there in the best of hands. 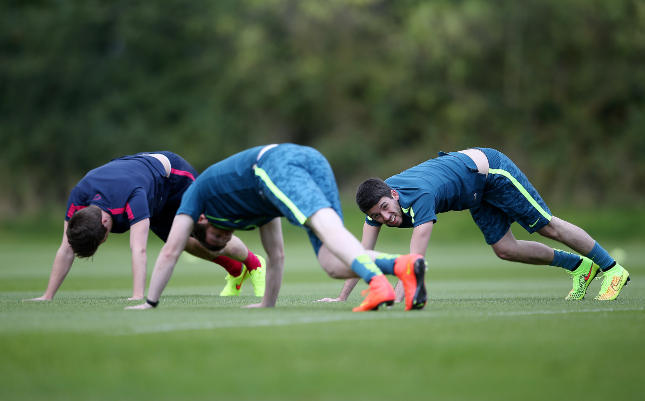 But we’ll certainly take things away for our own game, too:

Five Things The Nike Academy Do That You Can, Too:

– Always Ask (and be prepared to answer, if you’re a coach): understand the end-product of the exercise, it’s easier to stay motivated and will make you a more intelligent footballer.

– Philosophy: If your team is packed full of individuals, having an overarching style of play can give people a reason to play other than for themselves, and help develop that elusive ‘footballing brain’.

– Learn the World’s Greatest Stretch: Activate all your muscles in under five minutes and tag it on to the end of your warm up, essential for getting to those under-stretched muscles.

– Buy a Hockey Ball: Seriously. You don’t need a Power Balance Band or Under Armour ArmourBite – rolling a hockey ball (or a tennis ball) under your leg muscles is second only to a pro sports massage after a game and can get you back on the pitch, faster.

– T & C in S & C: Emphasise a slow-tempo controlled motion in your gym exercises for injury prevention and improved performance.

Written By
Kyle Elliot
More from Kyle Elliot
How do Nike's cheapest Mercurial Football boots stack up to the rest...
Read More