If the adidas F50 adiZero turns out to be anyway decent, then the speed boot market place is going to get a whole lot hotter.

As it stands, it could be argued that when it comes to technology and weight, the Nike Mercurial Vapor Superfly sits on top of the pile. 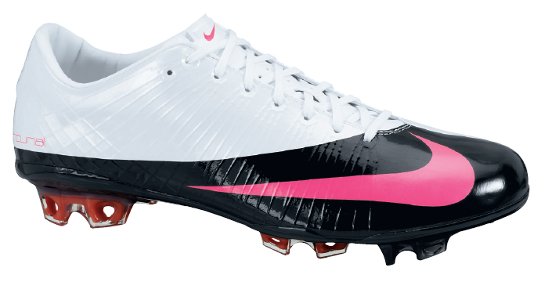 Having ironed out those initial teething problems, the Nike football boots have gone from strength to strength, certainly in the pro game at least. Mind you, the likes of Ronaldo and Walcott don’t have to fork out £225 a time for the honour of playing in them. Performance and Flywire technology notwithstanding, in these tough economic times, over £200 for a pair of football boots is a stiff amount to pay.

Of course, by the time the F50 adiZero makes an appearance, the Superfly II will have already been revealed. Don’t rule out a price drop from those marketing boys at Nike. They’re clever that way. And of course, there is always the more reasonably priced Vapor V and yet to be seen VaporVI.

PUMA made a bit of a howler with the initial colourway of the v1.10 but have hit back strongly with the Gold / Black / Red version which has received some very strong publicity during the African Cup of Nations. Angola is also being used as a great shop window for the original boot which, from a distance, isn’t really that bad. On pre-order now is the v1.10 in Black / Red / White and of course, the K-Leather version which has received some serious praise since it was featured on Footy Boots.

There are other speed football boots which shouldn’t be counted out but in truth, most of them could be afforded cult status as opposed to worldwide mass appeal, so it’s definitely PUMA and Nike that adidas will be looking to have a go at.

So what will adidas need to do to get a foot hold in this ‘blue riband’ sector.

Price will be important but with a release date not expected until the Spring (at least) it’s not particularly easy to get a handle on where these boots will be positioned though a figure of £120 is being bandied about.

Weight will be crucial and if the reports doing the rounds on the message boards and cyber space are to be believed, then each boot is coming in at 160g, that’s 25g less than the current Superfly.

It’s also thought that the SprintSkin tehnology will have a major role to play following its d'©but on the F50i.

As for the whole look, there are a few boot-leg pictures out there but more importantly, a few images now of professional players giving them a try in training. So keep your eyes peeled.

And then there is performance, or at least, as much performance that you can squeeze in to boot that weighs about the same as two-thirds of a tub of margarine!

Whatever adidas has in store, it’s going to cause an all-mighty shake-up with the German brand having previously come under fire for not doing enough for the out and out speedster. That looks like it’s going to change big-time and we can’t wait.

Written By
Felipe
More from Felipe
Six football boots were nominated as being particularly outrageous, but which boot...
Read More