What if we could tell you who would win Euro 2012, right now? Would you use that knowledge for good, altruistic purposes? Or would you go and place a series of bets that would, ultimately, alter the course of history like Biff in Back to the Future II? 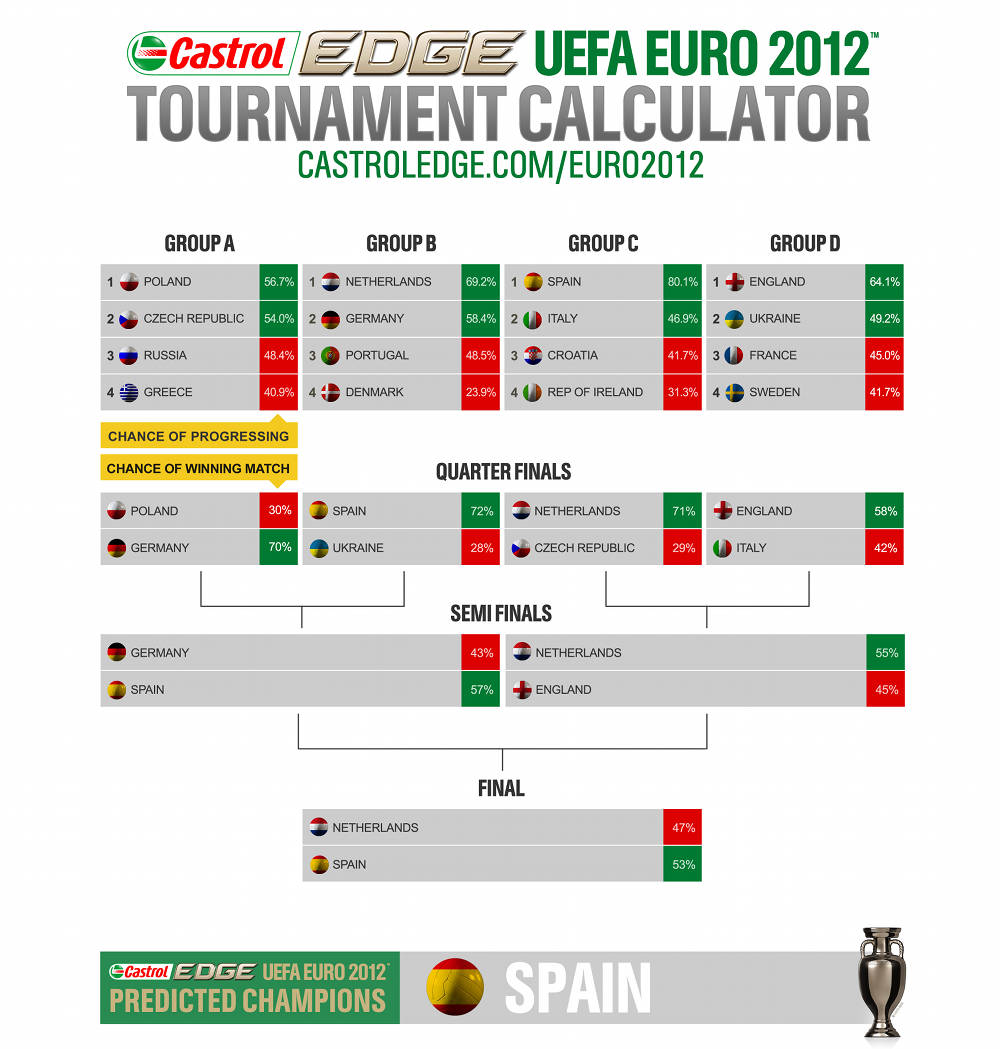 Obviously you’d do the latter. We all would. Thankfully identity of the winner of Euro 2012 (and the winner of every other major sporting event for the next millenia) died along with Paul the Octopus.

But that hasn’t stopped Castrol EDGE rolling out their Calculator to give us a very educated guess at the twists and turns of the European Championships this summer.

Amongst the highlights of the Castrol EDGE Calculator’s predictions:

– Spain will become the first team to win back-to-back European Championships
– England will make it to the Semi Finals, before losing to the Nethlands.
– The Republic of Ireland will fail to survive their ‘Group of Death’.
– Both host nations will progress to the knock-out stages.

First launched for the 2010 FIFA World Cup where it accurately predicted nearly 70% of teams’ progression, Castrol EDGE has applied the same expertise they apply to the development of their strongest ever oil to create the Castrol EDGE Calculator, using the latest technology and data analysis techniques to identify which nations have the strongest chance of success at UEFA EURO 2012.

By analysing past team performances, the Castrol EDGE Calculator will help fans plan which stadiums they’ll be visiting by predicting which nations will have the strength and determination to make it through the demanding group stages, before testing their mental strength as the competition enters the knockout stages when nerve-wracking penalty shoot-outs could come into play.

Created by the same team of Castrol EDGE Performance Analysts behind the Castrol EDGE Rankings, they calculate the attack and defence ratings of each nation.

Then by simulating the tournament over 100,000 times, and taking into account the draw groupings, the Calculator can predict how successful nations will be in their groups, whether or not they’ll progress to the knock out stages, and ultimately each nation’s chance of winning the tournament.

Fans can find the Castrol EDGE Calculator at castroledge.com/euro2012, where it will be updated after each UEFA EURO 2012 match so they can see the impact of every match result on their nation’s chances.

We think the results are surprisingly likely –  our only fault is they look a touch predictable – there’s always one or two surprises at a tournament like the Euro’s!

Written By
footyboots
More from footyboots
https://www.youtube.com/watch?v=ATxZ6PZQmtI Cristiano Ronaldo has a chat with Nike about his new signature...
Read More