Whilst other national teams seem to have settled into a rhythm of launching new kits ahead of major international tournaments (once every two months), adidas continue to utilise their World Cup 2010 & Euro 2012-champions Spain to their fullest, releasing a new home shirt for 2013. 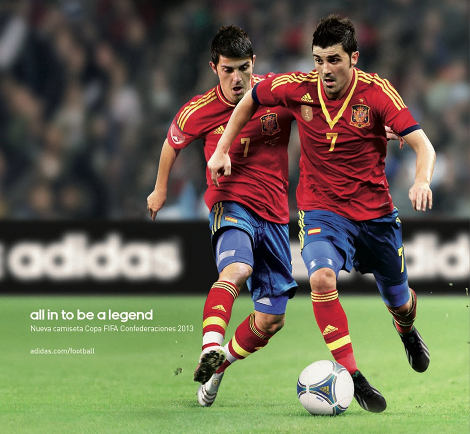 Whilst most other national teams will spend the next 12 months focusing their sights on World Cup 2014 qualification, Spina are one of a handful of teams getting a slightly earlier trip to sunny Brazil for the FIFA Confederations Cup.

Hosted by the nation that’s next hosting the World Cup, the Confederations Cup is the perfect prelude to the biggest tournament in world football, showcasing the winners of other FIFA-affiliated tournaments in a fortnight long clash of football – as well as testing out the Stadiums and infrastructure for the next World Cup. 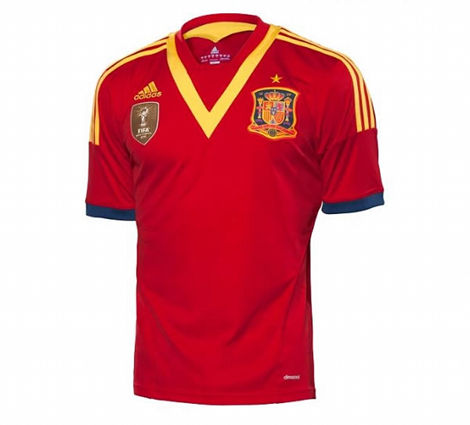 So, to see out the remainder of their World Cup qualifying campaign and participate in the Confederations Cup in June, adidas have bestowed an all-new home kit to FIFA #1 -ranked Spain.

Featuring a striking yellow neckline, the chevron below the collar is the main point of difference to the last couple of Spain shirts we’ve seen – definitely bringing something new to the table in terms of design. 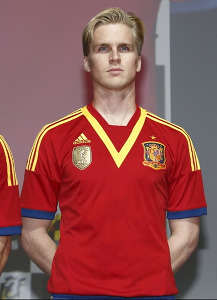 Longtime fans of La Furia Roja will also note the return to the more-traditional bright red for the main shirt colour, rather than the slightly darker version Torres, Xavi, Iniesta & co. wore for in Poland & Ukraine earlier this year.

The old-school collar design is a conscious decision by the Spanish football federation, who day the kit “reflects the personality of all the generations of players who have worn the shirt in the last 100 years”. Additionally, the placement of the famous adidas logo so high up the shoulder to accomodate the FIFA 2010 World Cup Champions badge certainly give the shirt a classic feel. 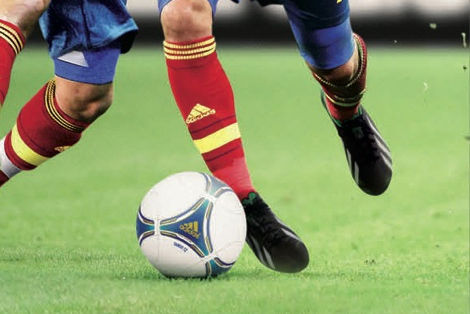 The new Spain Shirt for 2013 will hit stores from Tuesday 13th November 2012, though whether the National Team wear their new uniform in their friendly against Panama (who also traditionally play in a Red kit) has yet to be confirmed by adidas or the Spanish football federation.

The sharp-eyed amongst you will also note striker David Villa’s choice of footwear in the promotional imagery; in contrast to the launch colourway, it looks like there’ll be a darker alternative version of the adidas F50 adiZero out in the wild soon…

But sticking with the shirt – is the new Spain Home Shirt 2013 a winner? Let us know in the comments!

Written By
Kyle Elliot
More from Kyle Elliot
All the attention was on the FA Cup this weekend as Newcastle...
Read More