Ahead of this week’s international friendlies seems like the perfect time for many teams to be hammering out new kit deals with big brands, and that’s exactly what World Champs Spain and adidas have done! 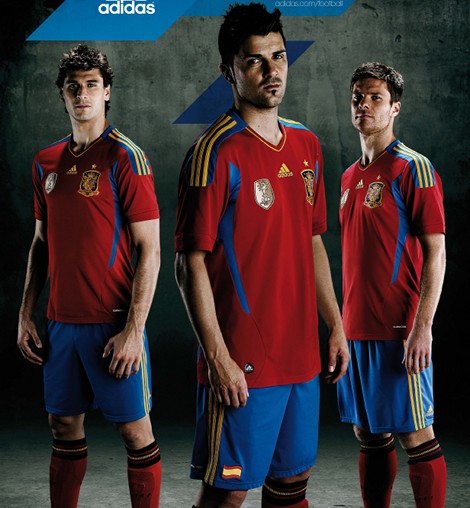 The new deal will last until December 2018 and comes as adidas and the RFEF (Spanish Football Federation) celebrate 30 years of partnership, which has flourish recently as Spain have gone from strength-to-strength on the international scene and currently hold the European Championship in addition to the World Cup.

https://www.youtube.com/watch?v=-Q37Io3k5sM
“We are very proud and excited to announce the extension of our successful partnership with the Spanish Football Federation RFEF. adidas is the global leader in football and Spain is currently the strongest team in the world which makes this partnership a perfect fit,” said Herbert Hainer, CEO of the adidas Group.

adidas recently released new Home & Away kits for the Spanish national team ahead of their European Championship qualification, and also sponsor many of the squad’s star players, including leading goal scorer David Villa.

Looking back at some of the ‘vintage’ adidas Spain kits, it’s great to see there’s a relationship with such history as that between the RFEF and adidas, especially in the wake of the German brand losing France to Nike.

We’re glad to see that it’s set to continue for another 7 years!

What about you? The right move for Spain? Or should they have considered a switch to someone like Nike – or even a Spanish brand like Joma?

Written By
Kyle Elliot
More from Kyle Elliot
You know what it is. The adidas Predator Instinct gets an aggressive...
Read More