It seems that FIFA aren’t looking too kindly on players wearing neck-warmers out on the pitch at the moment, and are proposing a ban on Snood pending the results of a debate in March

Whilst the debate on Snoods among the general public and managers alike seems to have simmered down, it seems FIFA are out to bring it back to the boil in March at an IFAB meeting.

Scheduled for the 5th of March, the same IFAB meeting will see the top minds in world football decide whether to implement goal line technology amongst other pressing issues.

It seems, though, that the agenda has room for discussions on the now-standard neckwear as a FIFA spokesman stated earlier today, “We want a debate over the snood and whether it could be dangerous.

“There may be a safety issue – if for example a player was running through on goal and an opponent grabbed his snood, that could pose a potential danger to his neck.” 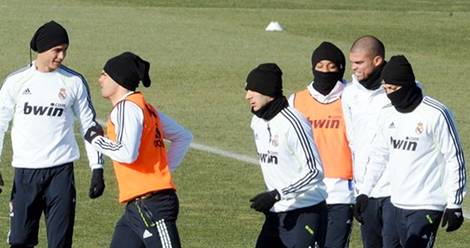 Real Madrid would be loathe to see FIFA exclude the Snood

55% of Footy-Boots.com readers said they wanted a Snood for themselves in our recent poll, with an additional 25% saying just let the players wear what they want to wear and be done with it – so at the moment it’s safe to say the footballing public at large have come to accept the pseudo-scarf.

Whilst we understand that FIFA have a right to ensure player safety and bring uniformity to the beautiful game, we’d like to point out that if players are grabbing each other’s necks when they’re through on goal, there’s bigger problems to worry about than the snood!

Do you think FIFA are over-reacting? Or do you think it should always be a case of ‘safety first’ for football?