Slovenia dig deep for a hard fought victory over energetic Algeria to secure their first ever win in a World Cup. 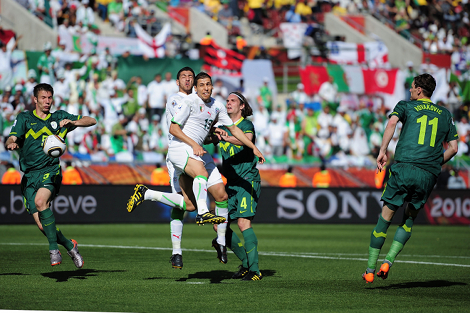 Slovenia and Algeria made a tentative start to their World Cup campaigns as both teams struggled to find momentum in the first half of their Group C game. Portsmouth’s Nadir Bel Hadj providing the most clear cut opportunity with a swirling free-kick testing Samir Handanovic in the opening stages.

What the first half of this encounter failed to produce in quality of football, the second did produce in talking points. The first of which was substitute Abdelkader Ghezzal picking up two bookings in quick succession for a needless shirt-pull and and even more needless handball.

Algeria fans will argue this was the turning point for their team, as less than 6 minutes later Slovenia took the lead via a speculative Robert Koren effort.

Free-Agent Koren picked up the ball outside of the Algerian box and twisted and turned his way into enough to space to squeeze an effort from his Nike CTR360 Elites towards goal. Koren would have been disappointed with the effort, though, as is it seemed destined for the gloves of Chaouchi in the Algerian goal.

Unfortunately for Algeria, Chaouchi mistimed his attempt to gather the ball, which slipped under his side to give a spirited Slovenia the win.

Written By
Kyle Elliot
More from Kyle Elliot
See how the Sky Blues will look as they seek Champions League...
Read More