As TV formats go, it doesn’t sound too promising. Five blokes talking about football, watching games on monitors that we are not allowed to see whilst taking updates from reporters with their backs to the action. In fact, the design more closely resembles a radio show. But Soccer Saturday on Sky Sports is a TV hit and the reason is unquestionably down to the host, Jeff Stelling. 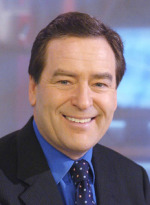 The 51 year old Hartlepool United fan oversees a marathon six hour show alongside football luminaries such as Charlie Nicholas, Frank McLintock, Clive Allen, Alan Mullery and Matt Le Tissier. They preview the matches to come, keep us up to date when they’ve kicked off and then dissect them moment by moment until Stelling’s microphone is eventually unplugged at 6pm. It’s fast paced, hugely entertaining and normally, very, very funny. The facts and figures keep flying with Stelling somehow managing to keep tabs on the games, the league tables and leading scorers whilst also bringing the best out his guests.

He is a true master at work, and just recently was voted sports broadcaster of the year for the third year running.

Stelling, Mr Modesty himself, is aware of his status as the pundit’s favourite presenter but puts it down to nothing more than hard work. “It’s all about preparation” he told Footy Boots. “Come Thursday morning, I start looking at statistics, newspapers and web sites and that continues for the next 48 hours. Mind you, if you asked me at 11.55am on a Saturday morning for the name of West Ham United’s leading scorer, I probably wouldn’t be able to tell you. But once we get underway, I just seem to get in to ‘the zone’ and I’m able to recall all of the homework I’ve done.”

The show has run in its current format for 12 seasons and it brings together Stelling’s two great loves, football and broadcasting. Even so, he’s been surprised by both how popular the show has become and its place in the hearts of thousand of football fans up and down the UK and beyond.

“I remember 15 years or so ago, trying to follow Hartlepool United’s fortunes on a Saturday afternoon. BBC Radio were usually doing a top flight commentary and United didn’t feature that prominently on Grandstand so I usually ended up sitting in my living room watching Teletext. I used to think I was the only one of a few fans who cared enough to do so, but judging by our viewing figures and the impact the show has made over the years, there were obviously hell of a lot of people in the same boat as me. To be honest, I was slightly cynical about the show’s chances of success when we started out but it soon became clear that we brought immediacy to the screen that other broadcasters find it hard to match. I think Soccer Saturday will go on for years – certainly post Stelling!” 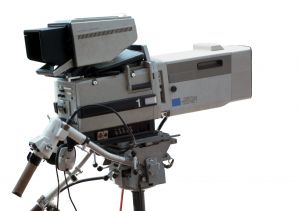 A Hartlepool lad through and through, Stelling started his journalistic career on the local paper before getting his first broadcasting job covering Middlesbrough games for Radio Tees. He also worked for LBC, BBC Sport, Channel 4 and the ill-fated BSB channel before ending up at Sky Sports in the early 1990s. And his efforts haven’t gone un-noticed. A couple of years ago, BBC Television tried to poach him for Score, their version of Soccer Saturday. Stelling rejected the offer and stayed loyal to the satellite broadcaster even though the BBC job would have potentially raised his profile in millions of non-Sky homes.

Back to Saturday afternoon, and as 12 noon approaches, the make up girls have applied their last touch of foundation (yes, even ex-footballers wear a bit of slap when they’re on the telly) and Stelling is in excited conversation with his panel of experts. 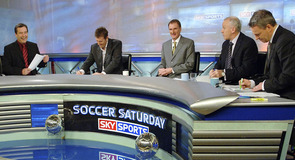 “The guys are crucial to the success of the show” he explains. “They need to have played at the highest level so they have the respect of the fans and they also need to be relatively eloquent and have the ability to talk to me whilst watching a fast moving game. Importantly, they all need to be team players. Anyone who isn’t is going to stick out like a sore thumb. And balance is crucial.

Rodney Marsh was a great pundit when he did the show but Marsh x 4 just wouldn’t have worked. You needed a reliable, more reserved character like Frank McLintock to haul him back every now and again. As for why they do it, I honestly think most of them really enjoy it. They get paid OK but it’s not for the money. Former Arsenal and England player Paul Merson is one of our latest recruits and after approaching his debut show with a certain amount of trepidation, he’s really got in to the way it works now and is having a ball.”

As do the Soccer Saturday audience. As well as being a wonderfully informative show, it has produced some of the best one-liners ever to come out of the goggle box. Stelling once memorably came out with “they’ll be dancing on the streets of Total Network Solutions tonight” when company side TNS won the Welsh League title. But his personal favourite involves a player named Gareth Jellyman.

“I’d spotted his name a few times on the teleprinter” he explained “and I’d worked out a line to use should he ever be sent off. The thing was, his record was pretty spotless so I didn’t think I’d ever get to use it. Then, one afternoon, just as the first results started to come through, I saw that he’d been dismissed. My chance had come. Gareth Jellyman’s just been sent off paying for Mansfield I said!.not sure what occurred there but I assume he threw a wobbly.”