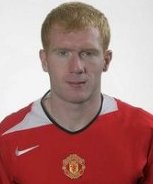 Manchester United boss Sir Alex Ferguson has confirmed that Paul Scholes will definitely play in the Champions League final against Chelsea or Liverpool after his winning goal against Barcelona.

The former England midfielder missed the 1999 triumph against Bayern Munich because of suspension but nine years on, he is now set to feature in what will be the first all English final in the history of the competition.

Scholes’ blistering strike from 25 yards was only his second goal of the season, and his first in the Champions League for a year and a half.

He’s one of the great players to come through the ranks here.

We can’t expect him to score 10-15 goals a season like he did when he was younger, but this one makes up for all the ones he can no longer score.

But I’m so pleased for everyone. It’s a great feeling, marvellous. This club deserves to be in the final.