If we’re not getting emails, tweets or Facebook messages about football boots, one thing people ask us about is shinpads; what to buy, which are the safest etc.

But, unlike football boots, shinpads aren’t something we get to see loads of ads, tech specs or reviews on, so it’s kind of tough for us to give out  advice on something we know comparatively little about.

So we thought we’d test out a few of the different types of shinpads to see which styles we prefer, and unlike our list of the most expensive shinpads on the market, we went for styles that are relatively cost effective.

We tested out each models over a few training sessions, kickabouts and matches to see which style we preferred the most. 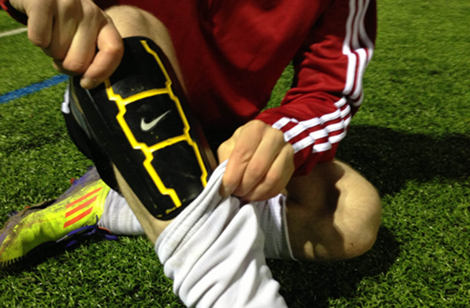 Slip-in shinpads are brilliantly easy to just pop in your socks and start a game. Usually a plastic or carbon frame backed by impact-absorbing foam, there’s nothing simpler than just sliding a slip-in pair of shinpads as part of your pre-match ritual.

You can also count on slip-in shinnies to be really lightweight. It’s no surprise the F50 and Mercurial Vapor both have matching slip-in shinpads as part of their range.

Slip-in shin guards are also among the cheapest you’ll be able to find. Thanks to their simple design, you can pick up some styles for next to nothing – great for a casual player.

As well as being slip-in, they’re also slip-around! Guard-stays often aren’t enough to tame the errant menace of slip-in shinnies, meaning you might have to shell out a little extra on a set of sleeves to keep them in place. It’s no surprise we often see professional deploying a heroic amount of tape to hold them in place!

Coverage is also an issue – whilst lightweight and easy to slot in, there’s also a lot of exposed leg on display, meaning they’re often not the safest. 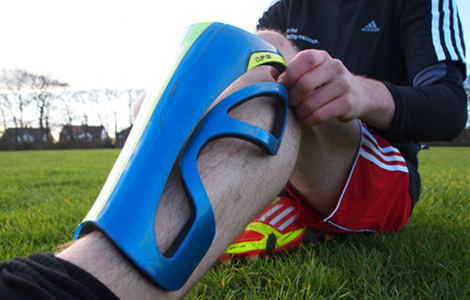 Probably the newest style of shinpad in the game, the clip-on style of these adidas Predator clip-ons is something to behold. They’re a great looking bit of kit that are really impressively constructed.

In terms of impact-protection, these shinpads offered the most of the styles we tested. Wrapping thick foam and plastic round the shins and extending to the calf, it’s no surprise team-mates quickly took to nick-naming them the ‘Robocop shinnies’!

The style is inherently bulky, and whilst that’s good for protection, the design does feel a little clunky on your legs for the first few games – something that might not fly with players who want to feel lightweight.

Clip-on shinpads also require you to have a specific shape of leg. If you’re chicken-legged like me, they can slip down your legs whilst you’re running, or even worse, if calves are too thick, they might feel restrictive and destracting. 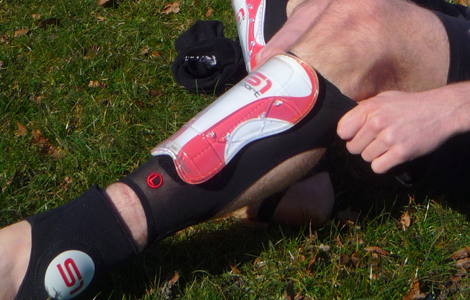 Admittedly, whilst there are more generic strap shinpads on the market, we’ve opted for the S1 Sports model. Simply the daddy of strappy shinnies, these things don’t budge when they’re in place.

Like the slip-in shinpads we tested, the S1 are low-profile and un-intrusive, and are adjustable to just about any log width or size. Additionally, the S1’s can take a knock.

We’ve been using our pair for well over a season now, and barring some superficial scuffs on the shell, they’re in great nick.

As petty as it sounds, the S1’s aren’t as user-friendly as the competition. The s1’s harness-style straps do mean you can’t just throw them down your socks and crack on with the game, but that seems to be the cost of having them stay more-or-less motionless during a match.

And honestly, we’d probably have spent just as much time and effort taping up the other two models. 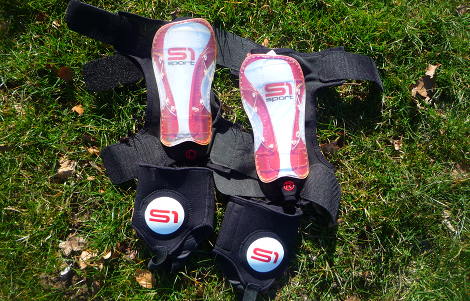 After testing all three styles out, you’ll find most Footy-Boots.com staffers playing with the strap-style S1’s on a weekend. The lack of a need for tape, sleeves or guard-stays is a real feather in the S1’s cap, and they are wonderfully protective for their low-profile size and shape.

We contacted S1 to see if they planned on celebrated their win in the shinpad showdown – and they replied by saying they’d give every Footy-Boots.com reader 33% off their online prices until March 31st 2013 (or until stocks run out)!

Just head to S1’s official online store and enter the discount code ‘footyboots’ in the pop-up window to claim your discount!