Sergio ‘Kun’ Aguero has officially put pen-to-paper for German sports powerhouse Puma, committing to wearing their football boots for the foreseeable future in what is being described by Puma as a ‘long-term’ deal.

The deal brings to end one of the longest and drawn-out football boots sponsorship sagas in recent memories, as the Argentine forward played in adidas, Nike and Puma soccer cleats over the past 3 months.

Aguero started life at new club Manchester City in Puma football boots, and we’d have to guess his excellent form since arriving in the Premier League was a deciding factor in deciding to wear the Puma v1.11 on a permanent, official basis.

Specifically, the former Atletico Madrid man will endorse the leather version of the Puma v1.11, making no secret of his preference for a natural leather upper.

Puma have been on an incredible signing spree over the past 9 months. Since losing Nicolas Anelka to adidas at the end of last season, Puma have managed to put the likes of Thierry Henry, Phil Jones, Mikel Arteta, Matthew Etherington and Steven Pienaar into their football boots, with the addition of Kun Aguero in what will likely be seen as a major coup for Puma. 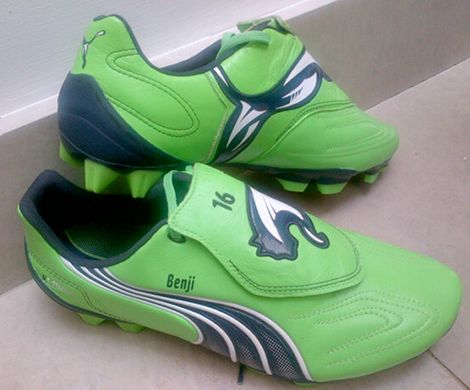 Despite not having been a Puma player for a full day yet, Aguero has proven himself an excellent endorser, taking to his Facebook and Twitter to extoll the virtues of his new football boots, telling fans “Today I used for the first time my new PUMA football boots. They are great because they are very lightweight, I even was faster!”.

Though Sergio ‘Kun’ Aguero’s football boots did cause some early uproar, after he revealed a picture before training of his new v1.11‘s asking “Check out my new Puma cleats! Wearing them today for the first time. Cool, huh?” before his official unveiling as a Puma player!

In his first interview as a Puma v1.11 wearer, Sergio Aguero said;

“I am really happy to sign with PUMA.  It is clear to me that PUMA is a fantastic brand; they’ve made a great impression on me with their product designs, marketing plans and future intentions in football.”

“I’ve been wearing the PUMA v1.11 boots on pitch recently, they give me a real edge and the confidence to play to the very top of my ability.  This is a great stage of my life that I’m in now, I’m excited to be starting this next phase of my career with Manchester City, and my new partnership with PUMA is another step towards achieving my dreams.”

Aguero will wear PUMA’s speed line of boots over a long-term period, commencing with the v1.11 boots in the lead green colourway in Manchester City FC’s first UEFA Champions League game against Italian side SSC Napoli

What do you think of the signing of Aguero for Puma?

Do you think it’s a statement of intent from the German brand?

Written By
Kyle Elliot
More from Kyle Elliot
Umbro brighten up the dark months at the start of the year...
Read More