The Story Of A Classic

The word “classic” is sometimes bandied about all too freely. This is particularly true in the excitable world of goalkeeper gloves, where every season scores of new releases are branded as “classics in the making”, only to fade away again into obscurity the following year.

But when Sells Goalkeeper Products created the Sells ‘Adhesion Ultra Wrap Aqua’ goalkeeper gloves, they found an exception to the rule. A classic in its own lifetime, the Wrap Aqua has been worn – and continues to be – by large numbers of top professional goalkeepers, including, over recent seasons, Ben Foster, Rob Green, Craig Gordon, Anti Niemi, Dean Kiely, Tony Warner, Mike Pollitt, Stuart Taylor, Jimmy Walker and Darren Ward – not to mention a huge number of pro goalkeepers outside the English top flight.

Keepers have placed so much trust in the Wrap Aqua gloves that they have often been reluctant to move on to upgraded versions released by Sells. Right across the game, from park to the Premier League, the Sells Wrap Aqua has become a mainstay among goalkeeper gloves, and is now one of the most popular professional quality goalkeeper gloves around.

7 years in the making

Technically, the current Sells Adhesion Ultra Wrap Aqua is a descendent of the Sells ‘Adhesion Plus’ latex foam goalkeeper glove that was originally released in 2001, just as Sells was launching itself into becoming the hugely popular and successful brand it is today.

Since then, the glove has seen a variety of modifications and enhancements, with the Adhesion Plus latex foam palms replaced by Adhesion Ultra latex, and the addition of the wrist strap sweat band feature, for example. But it is over these 7 years that the glove has built its great following.

So why exactly is the glove so popular? As is often the case with true ‘classics’, the success of the Sells Adhesion Ultra Wrap Aqua is built on a simple and functional design, with a predominantly all plain white latex foam backhand, a natural all-white latex foam palm and without a special finger support system.

It has no embossed or grooved palms, and doesn’t feature any weird or especially inventive technologies at all. But, for its simplicity, it’s a design that includes all the most critical features of professional quality goalkeeper gloves, and incorporates them to the highest standard: 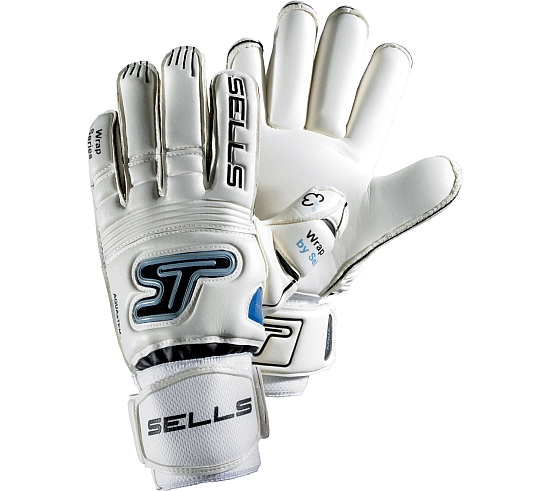 If Sells stands for something above all else, it is producing gloves of the highest possible performance. Sells is very self-conscious in its pursuit of this goal, as Dave Baxter, Director at Sells, told us: “every product is a performance product” – every product exists, first and foremost, to provide supreme performance.

Baxter adds that Sells “only produces goalkeeper equipment – we are purely goalkeeping”, meaning that 100% of Sells’ time is spent on refining and perfecting the goalkeeping products. Not every brand can boast to be so focused.

“We take feedback from many many keepers and retailers, and what it always comes back to is grip”. Crucially, according to Sells, the hardest thing about perfecting grip for goalkeeper gloves is finding latex foam that functions in wet conditions.

Good performing foam for dry conditions is easier, but it is in damp and wet conditions, where goalkeepers have to deal with fast moving slippery balls, wet playing surfaces and gloves saturated with water, that a latex foam really differentiates itself. Hence the development and popularity of the Adhesion Ultra “Aqua” glove, featuring Sells exclusive Adhesion Ultra latex foam, which is designed precisely to meet this demand. 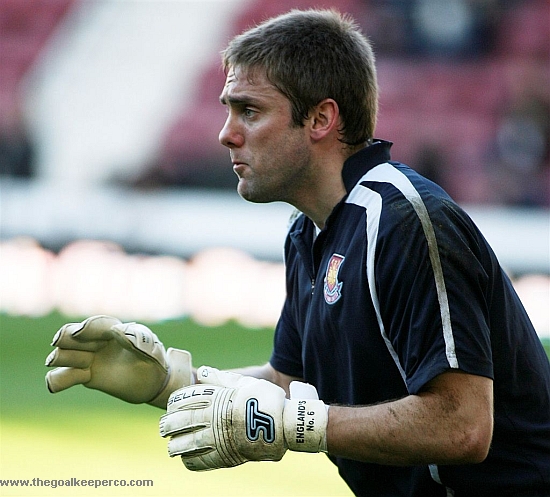 A great moment in the history of the Wrap Aqua: Adam Sells customises Rob Green’s Sells Wrap Aqua gloves to show “England’s No. 6” on the wrist strap, after Green is again overlooked for selection to the England squad in the 2007-2008 season, in spite of some excellent performances for West Ham.

Sells proudly talks about its commitment of a great deal of time and expenditure to the research and development of premium quality latex foams, in search of the next great innovation. Sells gloves are still produced by German manufacturers – with that famous reliable German precision – even after many companies have moved operations east. The reason? Sells believes that this gives them an advantage in quality that they are not willing to compromise, even to save money.

We had to ask. Dave Baxter of Sells, again, on the question – “Is the Wrap Aqua, for you, the perfect glove?”: “For now, with one or two others in our range, yes it is. But the technology is evolving so fast, and we’re continually doing so much research and development – some of the things we’ll be bringing out in the next 5 years you won’t believe'¦”

Written By
Felipe
More from Felipe
Diadora are about to lose one of their most iconic ambassadors as...
Read More