Diadora and The Scottish FA have announced the launch of the new Scotland away kit which will be worn by the team in the crucial World Cup qualifier in Amsterdam on 28th March 2009.

Similar to the previous away strip, which was a players’ and fans’ favourite, the new kit contains a true combination of the latest in performance garment technology, Scottish football tradition and Italian styling:

The fabric is composed by a skilful mix of pinstripe jacquard fabric, plain jacquard and elastic net. This mix ensures the maximum transpiration for a more comfortable and healthy sport activity. Thanks to the effect “ULTRA DRY”, humidity and sweat are drawn away from the fabric and are able to evaporate quickly.

The collar, composed with an elastic fabric, is inserted into the shirt ensuring a perfect fitting and maximum comfort as a normal round neck, while adding the classic effect of the traditional collar.

A mesh side panel comes down from the shoulders to the hips creating an exclusive design with a Y shape from front to back.

On the back, just below the neck, the letters read “ALBA”, the ancient Gaelic name of Scotland, just to underline the long Scottish tradition in fine detailing.

The exclusive quality seal applied in the bottom rear hem of the shirt is a certificate of the product’s originality and guarantees the Diadora quality standard.

In the Scottish domestic game, Celtic, who have just won the CIS Cup, have something else to celebrate. The club has announced they’ve agreed a new five-year kit deal with Nike, beginning in the summer of 2010.

We are absolutely delighted to announce this new deal with Nike. To once again secure a partnership of this kind with the world’s leading sports brand is tremendous news for Celtic Football Club. 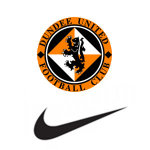 Similarly fellow Scottish side Dundee United have also agreed a kit deal with Nike who will be their official kit supplier for the next four years, commencing 1st June 2009.

We are delighted to secure this four year deal with such a world famous and quality brand as Nike.

For all the shirt news, go to footballshirtculture.com

Written By
Felipe
More from Felipe
A day after signing Kolo Toure, Manchester City are brushed off by...
Read More