If there’s one professional footballer we can definitely say is a boot' connoisseur, it has to be Bastian Schweinsteiger.

The German international might be the face of the adiPure series, but he’s also worn a whole variety of weird and wonderful designs; hybrids of his old and new boots, disguised prototypes, custom soleplates and plenty more. 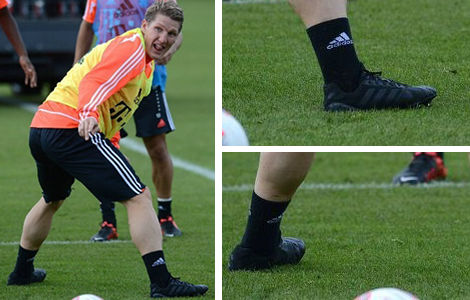 Bayern Munich star Schweinsteiger clearly knows what does into a good boot, is why we reckon that he’s one of the first players that adidas call on when there’s a new boot to be tested (that and he’s the a triple threat player; having endorsements with adidas on personal, club and country levels).

Case in point; in his last training session with Bayern before heading off on international duty, Schweinsteiger was clocked in a very unusual-looking pair of adidas black-outs.

Unmistakably baring the three stripes of adidas along it’s outstep, these new football boots could be any number of potential projects for adidas. Could it be a new adiPure? ' The lacing looks centred enough, and the forefoot is certainly some sort of leather or leather-like material (likely Taurus or Hybridtouch).

The heel looks to have a more substantial heel counter than the current adiPure 11pro, perhaps employing a similar SprintFrame to the adiZero or adiPredator to offer support to what looks to be a more fabric-like synthetic in the midfoot and heel; a futuristic feature of an otherwise classic silhouette.

One question on many boot-fans minds will be; are these the same adidas prototypes we’ve been seeing over the summer? We know adidas have at least one iron in the fire thanks to German international Sven Bender, who wore these unusual adidas creations in a pre-season game for Borussia Dortmund.

Whilst we can’t say they are or aren’t for sure, we’d point to the cut of the ankle and placement of the iconic three stripes for a point of difference; Bender’s stripes are a more diagonal shape, outlining the higher ankle cuff and running into the heel counter, creating a more aggressive look that Schweinsteiger’s, which run more towards the soleplate. 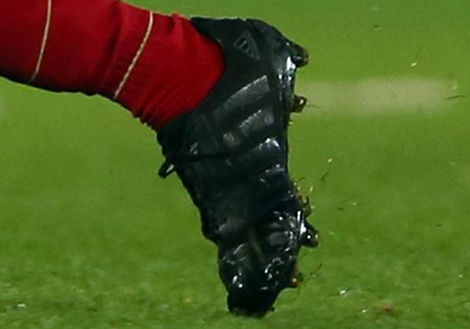 Another player that seems to be trialling boots for adidas is German second-division player Jonatan Kotzke. Whilst his pair seem to be lacking the distinctive yellow stripe across the toes, they do have the same matte-material midfoot and heel, with the shinier three-stripe material applied on top – something that is obvious on both Schweinsteiger and Bender’s boots.

If Schweinsteiger’s boots were a new adiPure, then that would leave Bender and' Kotzke in a second silo. We can confirm they’re definitely not the new adiZero, so that either leaves them as Predator or something entirely new! We’ve heard tale of adidas potentially cooking up a new boot focusing on power and protection, which might well fit into the gap left by the Predator’s shift in focus to control…

Whilst it could be two silos in development, there’s also a chance adidas have different prototypes with slightly different designs out there ‘in the wild’ – getting feedback on what works and what doesn’t on their new boots.

Which do you think it is?