Boots fans everywhere were left scratching their collective heads when Paul Scholes made his return to the Manchester United squad wearing a takedown model of the Nike T90 Laser IV – the Nike T90 Shoot IV. 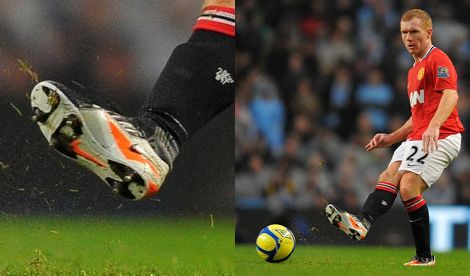 After wearing the Nike T90 range for most of his career, the former England international raised more than a few eyebrows when he came off the bench during Manchester United’s FA Cup victory over Manchester City wearing the £50 ‘sibling’ version of the flagship T90 Laser IV boot.

Whilst there’s certainly no shame in wearing the takedown model of any boot, especially the excellent Shoot IV, many pondered what unlikely set of circumstances lead to a long-time Nike endorsee and highly-paid Premier League footballer to opt for such an unlikely pair of football boots.

If the Mirror are to believed, Scholes simply didn’t have any other boots befitting of returning to Manchester United – having only decided to play in the match the previous Thursday – and had to buy some the day before the game!

The Salford-native reportedly retired the football boots he wore in his last game in Manchester United colours (the Champions League final against Barcelona) and had given the rest away to friends and youngsters in the Old Trafford youth system.

Realising the boots he had been wearing whilst coaching the Red Devil’s reserve team were too scruffy to wear for his return to the first team, Scholes gave the staff at his local JJB Sports a surprise as he stopped by to pick up a pair of Nike T90 Shoot IV‘s  for the bargain price of £40.

How’s that for humble? 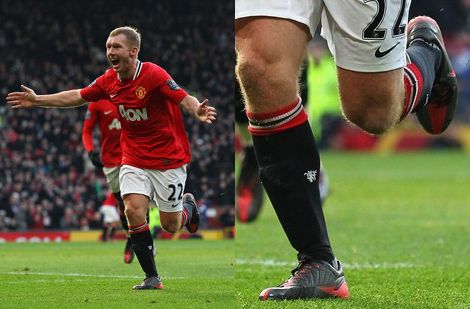 Having spent a further week training with the first team, it’s apparent that Nike have worked out an agreement with the midfielder; as he scored his first goal on his return to Old Trafford this weekend – wearing the Nike T90 Laser IV – Dark Grey / Solar Red.

Written By
Kyle Elliot
More from Kyle Elliot
We put the Champions League Final match ball to the test in...
Read More