Puma continue their trend of snapping up some of the biggest players on the planet as they have today announced the signing of Arsenal’s Santi Cazorla.

The creative midfielder has been revealed as a Puma athlete after signing a long-term deal ahead of last night’s game with Fenerbahce.

As well as joining team-mates Bacary Sagna, Mikel Arteta, Tomas Rosicky and Olivier Giroud in Puma football boots, Cazorla will wear the Puma evoSPEED – putting him in the company of Sergio AgĽero, Radamel Falcao and many more.

Eagle-eyed fans will have already seen the World Cup-winning Spaniard take to the field in his new footwear during last night’s Champions League qualifying match, in which the Arsenal man looked as full of his usual tricks, agility, speed and close control – a great match for the evoSPEED 1.2, no doubt! 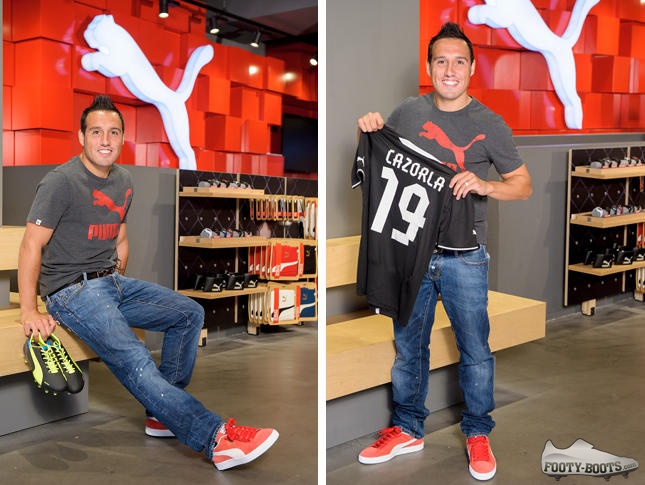 "Signing this new partnership with PUMA is an exciting step for me. I like the people, their ideas for football and I am impressed with their product development.

The evoSPEED boots I have chosen to wear are very light and give me a freedom and quickness of movement, which is very important for me to perform at my best.

I am pleased the new season is underway and hope I can help my club and national team enjoy a successful year, and I am looking forward to working with PUMA." – Santi Cazorla

Christian Voigt, Senior Head of Global Sports Marketing at Puma commented, "Santi Cazorla is such an exciting player to watch. His awareness of what is going on around him, technical ability and quickness of thought make him a very influential creative midfield player, and he is a wonderful asset for our evoSPEED product silo. We're very happy to have him as part of our PUMA football family."

The news of Cazorla’s arrival at Puma will undoubtedly come as a blow to two other brands in particular; adidas – Cazorla’s previous boot sponsor – are lacking in players to headline the adiPure silo, and with the Spaniard moving to another brand the Three Stripes will be eager to find another exciting talent to wear their heritage-inspired range.

Additionally, Warrior seemed to be in the offing for the Spanish International after he was spotted training in a pair of their Skreamer K-Lite earlier this year, but seem to have pulled out of the running leaving Puma to snap Cazorla up for themselves.

Last season’s player of the season for the Gunners, Cazorla seems like a strong addition to the Puma stable – but what do you think?

Written By
Kyle Elliot
More from Kyle Elliot
Check out a closer look at one of the most anticipated boots...
Read More