We love adverts here at Footy-Boots.com – and when guys like Nike and adidas come up with videos like ‘Write the Future‘ and ‘Fast vs. Fast‘ – why wouldn’t we?

So, when we were recently contacted by the UN with some of their latest ads to promote their Year of Biodiversity – at first we were shocked that the UN cared about football boots and football boots related websites – but then we jumped at the chance!

The campaign is aimed at raising awareness about habitat and species conservation among football fans and the general public during worldwide football events including the FIFA World Cup 2010 and through public service announcements featuring football stars.

The UNEP are currently running  a public service announcement featuring Cameroon footballer Samuel Eto’o. The campaign will be seen globally in print, out of home, in-store and on-line and will run through the end of 2010.

Personally – we love the ads, they’re fun, eye-catching and completely memorable (Love the flying Killer Whale), which are the 3 things any good advert should be! 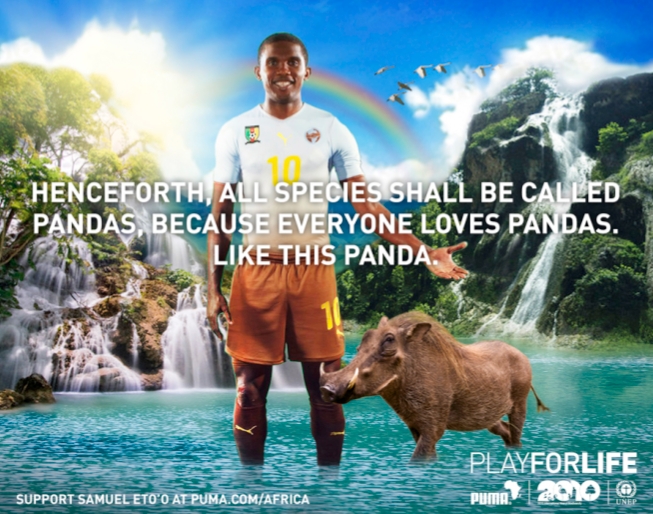 If you’d like to know more on the subject – make sure you head on over to the UNEP Website to find out all you need to know.

What do you think of the ads – we want you to be as honest as you can be – do the ads promote the Year of Biodiversity? Will you go and find out more on the subject?

Written By
Kyle Elliot
More from Kyle Elliot
Nike see out 2014 with the new Shine Through pack - a...
Read More