After a tough couple of months warming the bench at Manchester City, Mizuno’s main man Roque Santa Cruz is back at Blackburn Rovers. 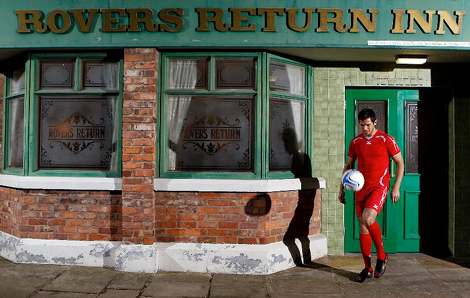 To celebrate his Return to Rovers the folks at Mizuno UK organised a photoshoot and interview session at the set of TV’s Coronation Street (‘Rovers Return’, geddit!?) to show off the latest colourway of Roque’s football boots of choice; the Wave Ignitus

You˘€žËve come down to Coronation Street and had a look at the Rovers Return Inn. What were your impressions?

It was great to come here and have a look behind the scenes of one of the UK˘ oldest soaps. Even though I haven˘€žËt watched it myself I heard a lot about it from my teammates at Manchester City so I am sure there will be a lot of people jealous that I have been on set.

Roberto Mancini and Carlos Tevez have said that they watch Coronation Street to improve their English. Do you watch any TV programmes to help you master the English language?

I like to watch movies that are mainly in English, I am a big fan of the Rocky Balboa movies. It˘ amazing how much my English can improve from watching these films so it is definitely a winning formula. I am a fan of the X Factor as well so that is probably the English show I follow the most.

Roque’s current single, in aid of the RSC Foundation. What would Cowell & Co. Say?

You recently released a music single for the Roque Santa Cruz Foundation. Would you ever consider going on the X Factor after your football career?

No, I don˘€žËt think I would be very good as there˘ a lot of pressure singing in front of millions of people! I think I will just stick to singing at home where no-one is around to hear me.

So you˘€žËve recently returned to Blackburn Rovers. How does it feel to be back?

It˘ great to be back, I feel great and there is currently a great atmosphere at the club. I have a lot of the same friends at the club from last time I was here and it is great to see that it is the same Blackburn Rovers from when I left. I really feel as though I am coming home and my decision to come back was a very easy one. 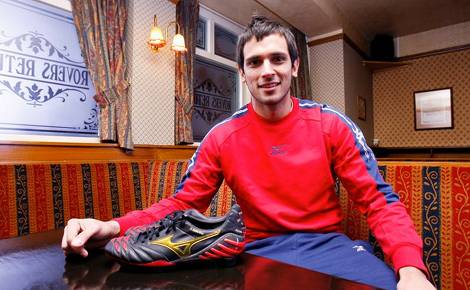 From the short time you˘€žËve been back at the club, what do you think Blackburn can achieve during the rest of this season and what are your personal goals?

I am coming back first and foremost because I want to play some football – that is the main focus for any player. The fans here are really passionate and obviously are looking to me as a striker to put the ball in the net so personally my aim is to get back on the pitch and score some important goals for the club.

Blackburn can definitely achieve a top 10 finish, the top of the table is very tight at the moment so anything can happen but the team are looking to achieve a higher finish than last season.

Who in your opinion are the club˘ star players that you are looking forward to playing with?

I think players who have been at the club for a long time like Ryan Nelson are priceless. These are players who are loved by the fans and know what the expectations are of the club. It˘ the same for me having played at the club before, I have a great relationship with the Blackburn fans and to return and play for them is going to be a great thing which I am really looking forward to.

I had a great time at the club a year and a half ago and I am just thinking about starting well in my first few games and scoring some goals.

Roque Santa Cruz is Mizuno˘ UK football ambassador and currently wears the Mizuno Wave Ignitus football boots. For a behind the scenes look at his visit to Coronation Street, visit www.facebook.co.uk/ mizunofootball

Written By
Kyle Elliot
More from Kyle Elliot
Find out what the Spurs playmaker loves about his new boots -...
Read More