It must be tough playing against Wayne Rooney, particularly as the England hit man is in sensational form right now. 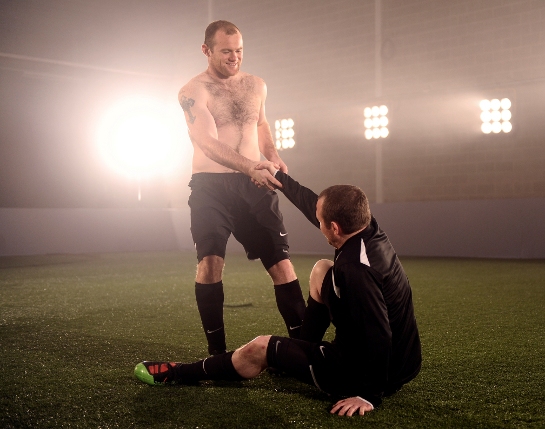 The Manchester United striker stars in a new video, playing against himself, as Powerade launches its campaign as the official isotonic sports drink of the 2010 World Cup.

The new commercial will air for the first time on Sky Sports during the AC Milan v Manchester United Champions League tie on Tuesday evening, though you can check out the viral by clicking here.

A shirt-less Wayne Rooney fuelled by Powerade , take on a shirted Wayne Rooney fuelled by water, in a unique one-on-one skills and endurance duel. The two Rooneys enjoy a prolonged high intensity challenge in which only one of them can become victorious. As you would expect, both of them are kitted out in the Electric Green Total 90 Laser III’s.

Alongside the launch of the ‘Rooney vs Rooney’ commercial, Powerade is running its most exciting on-pack promotion to date. Throughout February consumers are being offered the chance to win a once-in-a-lifetime training experience at either a football camp in South Africa or elite rugby camps at Twickenham and the Millennium Stadium.