Wayne Rooney is statistically the top performing player in the 2010 FIFA World Cup European Qualifiers, according to new statistics.

Capello may have just labelled him a ‘crazy guy’ when the England camp gathered this week, but Wayne Rooney is vital to England’s success as he is statistically the best player in Europe.

Four match days into the 2010 FIFA World Cup Qualifiers and England are sitting comfortably at the top of Group 6 with a 100% record, mostly thanks to the ebullient forward Wayne Rooney.

England have scored 14 goals and Rooney has scored or set up nine of those, meaning he has been directly involved in more goals than any other player so far in the qualifiers, which explains his Castrol Index score of 9.25 out of 10.

Rooney is joint-top goalscorer with five goals along with Belgium’s Wesley Sonck who lies second in the table, only 0.02 points behind the Manchester United striker.

The Portuguese midfielder Nani, Portugal’s top scorer in the 2010 FIFA World Cup Qualifiers, makes up the podium (9.11). Belgium, Germany and Northern Ireland are the only countries to have multiple representatives in the CastroI Index Top 20. 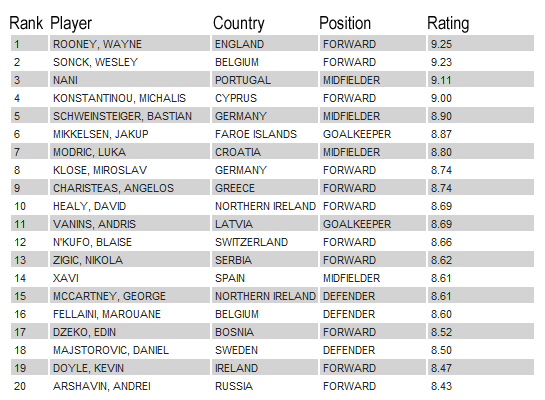 Capello’s England play Slovakia in a friendly on Saturday, before England facing the Ukraine in a World Cup Qualifying match on Wednesday.

With Europe’s best player on board, how can England fail?

The Castrol Index is an innovative way of using technology and statistics to objectively analyse player performance by ranking a player’s contribution to a team’s overall play in terms of scoring and conceding goals. Read the Castrol Index Explanation.

Training with the national squad, Rooney is currently wearing the Total 90 Laser II in the White Black Red colourway – Order Yours Now.

Written By
Felipe
More from Felipe
Do you love Mercurial Vapor football boots? Then why not check out...
Read More