Wayne Rooney says he’ll be more than happy if former team mate Cristiano Ronaldo’s Portugal fail to make it through to the World Cup finals in South Africa next year. 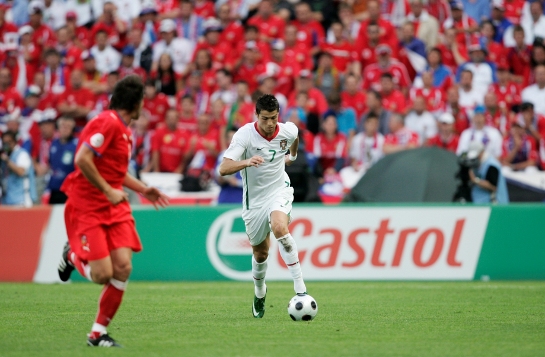 While England go in to their last two qualifying games unbeaten and safely through, Portugal are currently third in qualifying Group One, two points behind second-placed Sweden. They must beat Hungary and Malta in their last two matches, both at home, to salvage any realistic hope of a play-off spot.

Speaking ahead of Saturday’s match away to Ukraine, Rooney said:

It would be nice to see Portugal not there.

In the last two tournaments they’ve knocked us out and when we didn’t qualify for Euro 2008, we got a lot of stick from Ronaldo.

On a personal level too, things have not gone Rooney’s way against the Portuguese. At the World Cup in 2006 he was sent off for a stamp on Ricardo Carvalho. To rub salt in to the wound, Ronaldo appeared to encourage the referee to brandish the red card.

But Rooney says Ronaldo’s involvement, and the subsequent backlash in Britain, was a blessing in disguise.

I didn’t really get any stick. Ronaldo took a lot of it and I was pleased about that.

I still got it when I played for my club but that is just normal. In that instance, I know I could have taken a lot more.

I was disappointed with getting sent off. I never meant to stamp on him but when I watch it, it does look like I’ve made a stamp.

Of course it’s a straight red card. I’ve got no argument about that. I’ve got a chance to put it right in the next tournament.