As if further incentive were needed, Nike offered Wayne Rooney half a million pounds to win the Golden Boot at the 2010 World Cup.

Wayne Rooney is playing arguably the best football of his career. With World Cup 2010 on the horizon England fans will be praying that their talisman stays in this form and stays fit.

As if helping England win the World Cup was not enough, Rooney will have another incentive pushing him on to score vital goals for England come the summer…

Rooney’s football boot sponsors Nike, have according to the NoTW, written into Rooney’s contract a prize of £500K if he wins the World Cup Golden Boot.

To pick up the colossal wedge, Rooney would have to score more goals than the likes of Cristiano Ronaldo, Fernando Torres, David Villa and Luis Fabiano…no mean feat!

The bookies have Wayne Rooney as their joint second favourite to win the Golden Boot Trophy, which would make him only the second English player to have ever won the Golden Boot.

The last English winner of the World Cup Golden Boot was Gary Lineker at Mexico 86, he finished the tournament as top goalscorer with six goals.

Only four times out out of the 18 tournaments has the Golden Boot winner also won the World Cup Trophy. In 1962 Garrincha and Vava of Brazil shared the Golden Boot with four other players, each netting four goals each. Mario Kempes of Argentina in 1978 scored 6, Paulo Rossi of Italy in 1982 with 8 and most recently Ronaldo of Brazil in 2002 again with 8 goals.

The most goals ever scored in one tournament was back in 1958 when the Frenchman Just Fontaine scored a total of 13 goals. France only managed 3rd place as Brazil took the trophy.

However, Ronaldo of Brazil has scored more World Cup goals than any other player with a very respectable 15, unfortunately he is very unlikely to feature for Brazil in the 2010 World Cup. 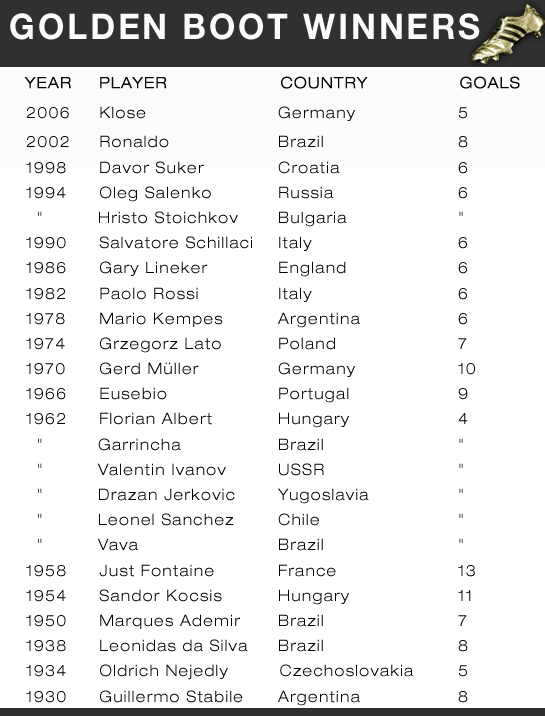 Do you think Wayne Rooney can win the Golden Boot? If not, who will?

Written By
Ramsay
More from Ramsay
For Summer 2016, the Nike F.C. range has a 'French Touch' led...
Read More