After close to six weeks out with a hairline foot fracture, Manchester United and England striker Wayne Rooney made his comeback last night in the Red Devils 1-0 Champions League victory at Sporting Lisbon.

The striker has become frustrated at Sir Alex Ferguson and the Old Trafford medical staff preventing him from returning earlier, having been straining at the leash over the last few weeks. 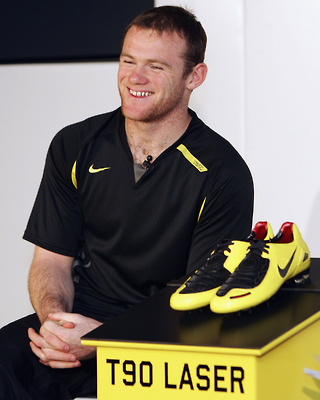 I’ve been dying to play,” Rooney said. “I feel I could have played a few weeks ago, so I’m a bit disappointed I wasn’t able to. It’s the third time I’ve had this injury and I’m obviously disappointed it happened so early in the season. Because I’ve had it before, I know when I’m ready to play and come back.”

Rooney’s foot fracture has reopened the debate about whether the lightweight design of modern football boots is to blame for the high number of foot injuries.

Rooney has however defended his Nike Total 90 Laser football boots:

“There’s been a lot of talk about the boots and a lot of old pros who played the game years ago coming out and talking about the boots,” he said. “But they don’t know what the boots are like. If you had a lad like Duberry stand on your foot, your foot is most likely going to break. I like to be an explosive player and I think that’s why it happens.”

Meanwhile, United’s north west rivals Liverpool have become the latest club to be inflicted by the curse of the metatarsal, with the club announcing that Adidas Predator Absolute wearing duo Daniel Agger and midfielder Xabi Alonso are likely to be out for six weeks, after suffering stress fractures to their 2nd (right foot) and 4th (left foot) metatarsals respectively.

Written By
Felipe
More from Felipe
The Tiempo Air Legend II gets a facelift. Check it out in...
Read More