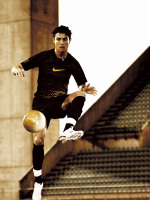 Cristiano Ronaldo’s stunning season for Manchester United in 2007 / 08 has seen him named as the FifPro World Footballer of the year.

Ronaldo’s 42 goal heroics gave him the edge over 54 other players who were on the shortlist.

As well as Ronaldo’s individual award, Manchester United were also represented in the FifPro team of the year with the Portuguese international joined by team mate Rio Ferdinand.

To be recognised by my fellow players is amazing.

I would like to thank my team-mates and coaches and everyone involved at United and the national team, as well as my family and friends for their support.

Written By
Felipe
More from Felipe
Lionel Messi is wearing his own signature F50.9 football boot, take a...
Read More