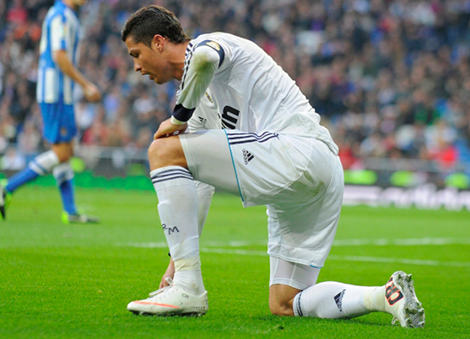 Los Blancos had to survive two Sociedad comebacks with only 10 men, following the sending off of goalkeeper Adan after only two minutes, with star-man Cristiano Ronaldo putting the game beyond the reach of their opponents with the last two goals.

After testing keeper Claudio Bravo with a couple of set-pieces, Ronaldo finally broke Sociedad’s resistance in the 67th minute, latching on to a clever lobbed through-ball from Karim Benzema and rolling a neat, first-time finish off the inside of his left foot to make it 3-2.

The former Manchester United man’s second will have been exactly what Nike were hoping for, though, as Ronaldo wrapped his all-white Nike Mercurial Vapor IX CR' around the ball to send home a signature free-kick, dipping to clip the underside of the crossbar to deceive the ‘keeper.

As well as on-pitch debut of the Nike Mercurial Vapor IX, the victory at the Bernabeu also marked Ronaldo’s first official game as captain of Real Madrid, and his two-goal haul now puts him at 171 goals in 171 games for the Whites. 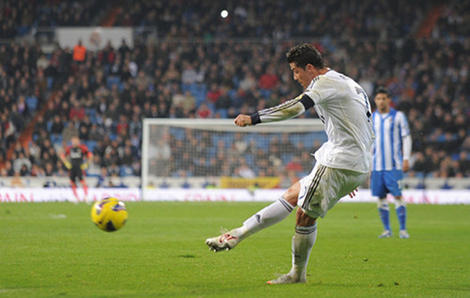 Ronaldo also endeared himself to fans by offering up the captain’s armband to club captain Iker Casillas – who was substituted in for the dismissed Adan – a gesture that will come as a much-needed PR boost with the Real faithful, who grow weary of constant rumour’s over the' Portuguese’s' happiness in Madrid.

All eyes will now turn to Switzerland, where FIFA will reveal who will receive the 2013 Ballon D’or – Ronaldo goes in as the underdog to Leo Messi, but many are hoping that this year Ronaldo has done enough to end his Argentine rival’s streak of three successive awards.

Can Ronaldo and his 171 goals beat Messi’s record breaking antics?

Cristiano Ronaldo plays his first official game as the Real Madrid captain. He scored 2 goals making it 171 in 171 games with the white jersey.

Written By
Kyle Elliot
More from Kyle Elliot
adidas give the new F50's an ice-cold new look as we see...
Read More