Whilst spending most of his career as the man behind the Nike Mercurial range of football boots, Brazilian legend Ronaldo stepped out onto a football pitch wearing the famous canary yellow for the last time last night wearing the as-yet unreleased Nike Tiempo Legend IV. 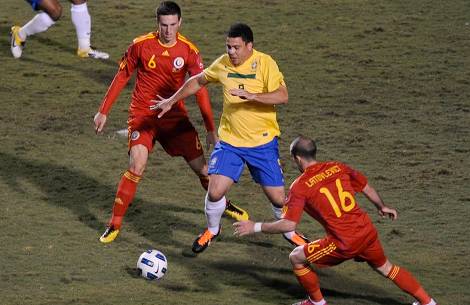 Playing out a cameo appearance in a friendly against Romania, ‘O Fenomeno’ joined the likes of Neymar and Robinho in the Brazil attack during the first half, but had to watch from the bench as one of his touted successors, Neymar, deftly round the keeper and set up Fred for the only goal of the game.

Ronaldo was hardly a spectator in his 15 minutes, as he saw three clear-cut chances fall to him in the Romanian penalty area; whilst one was nearly sent into the stands by the former Galactico, the other two found Romanian stopper Ciprian Tatarusanu in fine form, denying the legend a perfect farewell.

As always, though, we were keen to get a good look at Ronaldo’s football boots in his time on the pitch. 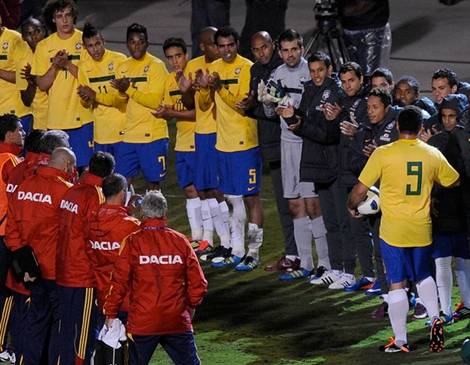 Whilst we perhaps suspected that Nike would be looking to make a huge splash at the event, gifting Ronaldo a special pair of Gold Superfly III’s, or perhaps a recreation of one of his two most famous boots; the 2002 Chrome/Lime Mercurial Vapor or the classic Mercurial ’98, Ronaldo opted to play out his career in something from the future of Nike football boots, rather than his past.

Distinctively coloured in Black/Max Orange/White, there was to be no mistaking which football boots these were, despite their unreleased status!

Ronaldo’s' Tiempo Legend IV has even been customised to include the National flag and the word ‘Fenomeno’ around the Nike tick on each cleat, which we can only guess was Nike’s choice of customisation, perhaps as a ‘thank you’ from the brand for single-handedly changing the way we think about football boots.

Thanks for the Memories: Nike’s special embroidery for the legendary striker.

The Tiempo Legend IV, as seen at the weekend on Ronaldo’s countryman David Luiz, might well not be the boots that the record-breaking striker will forever be associated with, but the blessing of a legend ahead will certainly see Nike’s latest soccer cleats in good stead ahead of their release later this week.

Speaking of which, stay tuned to Footy-Boots.com, as we’ll have all the details on this exciting new launch from Nike coming up in the next 48 hours… 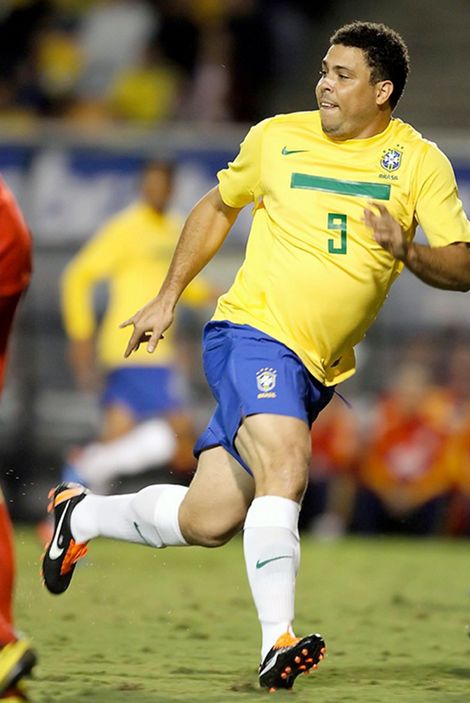 Alert as ever: Ronaldo lead the selecÄ‚§o charge during the first 45 minutes.

Nike have also produced this special video to mark the end of an era – see how (in Nike’s humble opinion) football falls into two eras; Before Ronaldo, After Ronaldo – see how one man changed football.

Use the comments to talk about Ronaldo, his football boots, or just show your thanks that he didn’t give ‘that’ haircut from 2002 another outing for his last international bow!

Written By
Kyle Elliot
More from Kyle Elliot
Nike's 'The Chance' Final 16 took on a US U-17's MNT in...
Read More