When we interviewed Jose Mourinho back in December, he told us that even when the team is on the summer or winter break, Cristiano Ronaldo can always be found pushing himself to the max by running and training on his own.

But what happens when you push one of the most physically-perfect athletes on the planet to their absolute limit?

If you’re the bods at Castrol EDGE – the brains behind the Castrol Stats database – you find out, and make a documentary about it!

This year, Castrol EDGE proudly presents a film-documentary starring one of the world's greatest football players, Cristiano Ronaldo, which will give fans an exclusive insight into what makes him one of the best footballers of his generation.

Castrol are obviously one of the biggest names in motoring, and apply their scientific and mechanical know-how to machines and engines on a daily basis.

But this new film-documentary sees the team at Castrol apply the sort of test-to-death mentality to Cristiano Ronaldo, and in the process push the Portugal and Real Madrid winger like never before in the most rigorous scientific examination of a player ever undertaken. 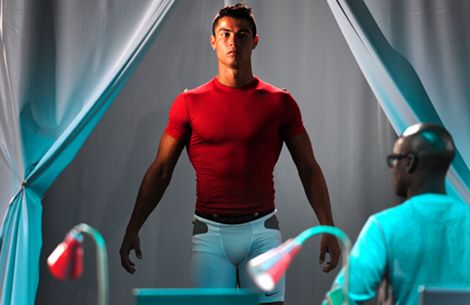 Castrol EDGE Presents Ronaldo Tested to the Limit sees the star player's legendary skills, strength and agility taken away from the pitch and into a high performance lab where the world's leading sports scientists use the latest technology to test him in a series of challenges that show exactly what gives Ronaldo the edge.

– Will his famous trademark free kick have the strength and power to stand up in an explosive encounter against walls of glass?

– How will he fare head to head against an elite sprinter in a unique battle of speed and agility?

– Can his mental strength and intuition help him through the pitch-black cross ball challenge?-

– Will his skill, reaction speed, endurance and strength help him outwit trained marksman to survive the ultimate test – Snipers Alley'?

At the filming in Madrid in July, Cristiano Ronaldo said: Ĺ›Shooting the film has been really exciting as it's the first time I've ever done something like this. The challenges were designed to look at my strength and skill in detail and it's been a great experience to see how my body works. The challenges were really tough, but I think I did well on the day.ĹĄ

The global premiere of Castrol EDGE Presents Ronaldo Tested to the Limit will take place in Madrid, Spain, in September 2011, before being broadcast on TV channels around the world – with Sky Sports having exclusive first-airing rights in the UK.

Also along for the ride are two Managers who know all too well the sort of ability Ronaldo has at his disposal; Fabio Capello and Arsene Wenger – who will offer unique insights from a coaches perspective on each of Ronaldo’s specialities.

Sounds to us like some serious business! And we can’t wait to find out what the finished product looks like, and maybe – just maybe – an insight into Ronaldo’s mind will help us improve our game!

But we won’t hold out hope for that.