Despite missing a penalty and the chance to give Manchester United the advantage in their Champions League tie with Barcelona, Ronaldo has vowed to make amends. 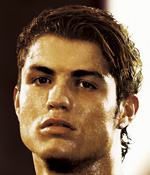 Ronaldo shot wide from the penalty spot in the second minute of the game, after Gabriel Milito was adjudged to have handled his header in the penalty area.

Had he have scored United could have been welcoming Barcelona to Old Trafford next week with a lead and an all important away goal.

But Ronaldo was positive after the game and does not seem to be affected by the crucial miss.

Sometimes you score, sometimes you don’t, I missed a penalty – no problem. I’ll try to score in Manchester. I’m always confident. I have 38 goals this season. It is not a problem if I miss one or two. I try to do my best in every game.

I didn’t change my style [for the penalty]. I scored a few penalties in that side but today I didn’t score – no problem. But now I will score in Manchester.

No one has said anything to me because I always try to score, to play well.

Barcelona played very well and kept the ball for a long time. I think we defended well. The team is very compact, squeezed, but we will try to play better in Manchester. Most of the time you create better chances, but Barcelona didn’t create a lot of chances either.

It wasn’t the best game but in Manchester we will try to win.

I’m sure the game in Manchester will be totally different. Barcelona won’t keep the ball like they did today. I think we’ll create more chances. It will be a different game and I’m sure we’re going to play better. We are at home, we will have 75,000 people behind us. We will try to play good football and try to win.