Whilst there will be 22 players fighting for the right to continue their Champions League adventure when Real Madrid host Tottenham Hotspur tonight, fans will be pinning their hopes on two players who have been talismanic for their teams this year. 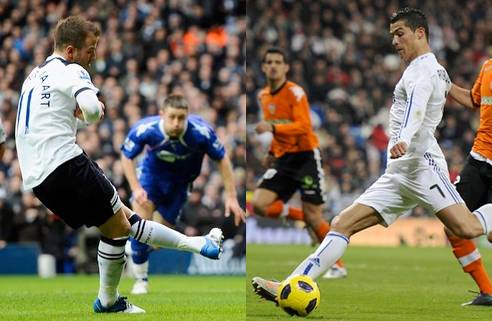 Both Cristiano Ronaldo and Rafael van der Vaart are set to take to the famous Bernabeau pitch tonight, with the former having recovered from the Hamstring injury that kit the Superfly III wearer out of Real Madrid’s devastating home loss to Sporting Gijon.

According to Castrol EDGE Performance Analysis, the Tottenham goal will be peppered with shots in their Champions League quarter final against Real Madrid.

Jose Mourinho˘ side have fired in more shots than any other team in the competition so far and nearly twice as many as Spurs. In fact, Harry Redknapp˘ team have mustered fewer attempts than of the other seven quarter-finalists

Despite this fact, both Real and Tottenham have scored 19 goals apiece in the Champions League and Spurs have the best conversion rate of the teams left in the quarter finals, scoring with 24% of their attempts at goal. 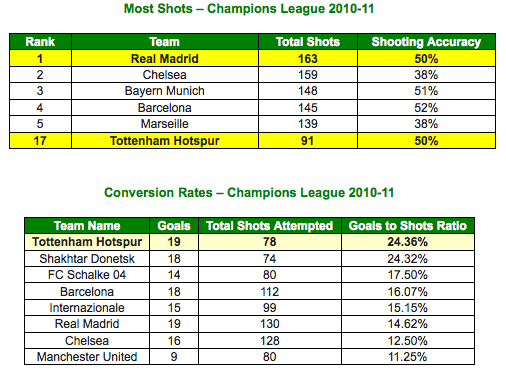 Chief among Real Madrid˘ cavalry of sharp shooters is Cristiano Ronaldo. The Portuguese forward is never shy of taking a potshot at goal and unsurprisingly has fired in more shots than any other player in the Champions League this season.

The Dutchman was snapped up by Harry Redknapp at the start of the season after being deemed surplus to requirements at the Bernabeu by Jose Mourinho, but van der Vaart has a chance to show the ”Special One” that he made a mistake by letting him go.

Between Premier League and Champions League this season, Spurs have won 56% of matches with van der Vaart in the team while they have only won 25% when he has been absent:

So, with all these stats in consideration – who do you think will come out with the advantage in this first-leg clash?

Will Ronaldo & Real’s constant pressure be too much for an oft-questionable Spurs defence?

Or will Rafa & Tottenham’s ‘Quality over Quantity’ discipline see them through to the second leg on level terms?