Cristiano Ronaldo is Fifa World Player of the Year for 2008.But what does the world really think of him? Nike are asking that very same question – love him or hate him? 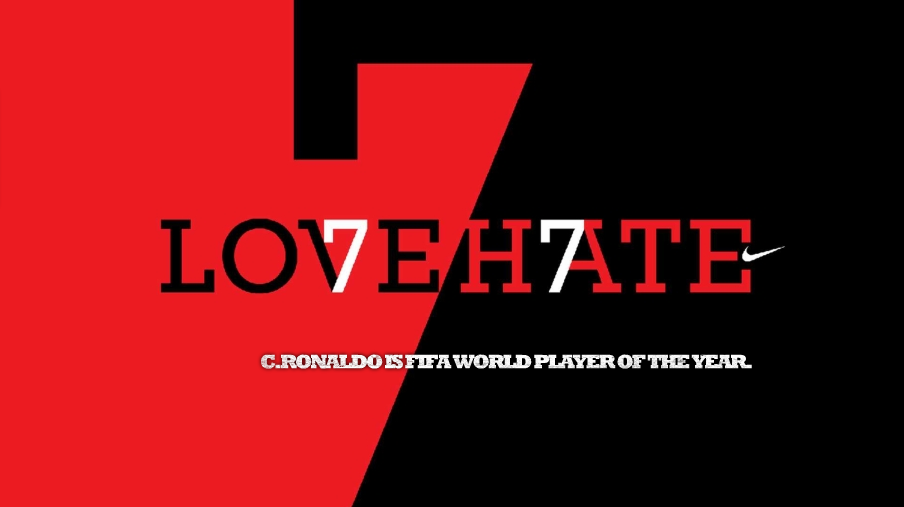 Cristiano Ronaldo has added the highly coveted Fifa World Player of the Year award to his growing list of honours for 2008. The 23 year old Portuguese international, who went through the majority of last season wearing the Nike Mercurial Vapor IV (having previously worn the Vapor III as well as debuting the SL in the Champions League final) is the first Premier League and Manchester United player to win the prestigious acolade since its inception in 1991.

Ronaldo received his award from Brazilian legend Pele having beaten last year’s winner Kaka of AC Milan, Liverpool’s Fernando Torres and the Barcelona pair of Lionel Messi and Xavi to the title.

The 23 year old superstar reveals that the love-hate reaction to him is ‘not a problem’, and is actually something that he takes to heart to make him stronger – as a player and as an individual.

Looking closer it seems Nike’s advertising machine is at work again with a cameo appearance of Ronaldo himself as an adoring fan.

Nike seem to best sum up the phenom that is Cristiano Ronaldo with this:

Young boys everywhere dream to be them or beat them. They are the ones we can’t help but feel deeply about.

But love them or hate them, When it comes right down to it, and the evidence continues to pile up, even the greatest critics can’t deny the insurmountable truth.

PFA Players’ Player of the Year

PFA Fans’ Player of the Year

FWA Footballer of the Year

Barclays Player of the Season

Uefa Club Forward of the Year

UEFA Club Footballer of the Year