Manchester United winger Cristiano Ronaldo unveiled his new Nike Mercurial Vapor 4 football boots in style by bagging a hat-trick in the Red Devils 6-0 demolition of Newcastle United at the weekend.

The Portuguese speedster has been in scintillating form this season, scoring 22 goals already in all competitions. After revealing a superstition for getting his hair cut prior to matches, it seems his prematch trips to the barbers are paying off, by way off a flurry of goals.

Ronaldo, renowned for his tricks and lightning speed recently raced a Bugatti Veyron in his new Mercurial Vapor’s.

Click here to watch Ronaldo take on the Bugatti Veyron.

Since its inception ten years ago, the Mercurial Vapor boot is designed to be about one thing only: to help footballers find the fastest route to goal. As the speed of the modern game increases, any advantage can be vital. 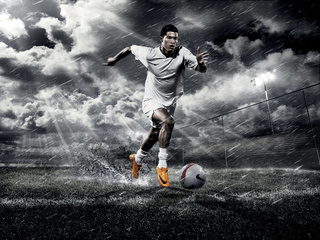 This new Mercurial Vapor features an innovative re-engineered upper; not just to make players faster, but to make them faster whilst dribbling with the ball and shooting. Only one seam exists in the shoe’s upper material (at the heel), while a new stitched stretch lace cover creates a cleaner ball contact area. The football boot is wrapped in a clear coating and strategically placed ball control lines run from the toe to the instep, creating a grippy surface for all playing conditions.

Andy Caine, Nike Football Design director said: “Speed and acceleration with and without the ball are essential in today’s game. We have worked with players to develop this new aerodynamic design which minimizes the boot to its streamlined essence to provide the optimum performance benefit.”

Made in Italy, the sleek aesthetic of the new football boot is as cutting-edge as the lightweight technology. Emphasizing the speed elements of the boot, ball control lines are there to represent speed. The Nike Swoosh wraps around the lace cover to give the football boot a faster look.

The introduction of Mercurial Vapor marked a revolution in football boot design. The results speak for themselves; for the last six seasons, the top goal-scorers in the English Premier League have worn Mercurial Vapor boots.