Ronaldo Luis NazÄ‚Ë‡rio de Lima, or better known to most people as just Ronaldo, the former golden boy of Brazilian football has caused uproar back in his home country as he elected to sign for club side Corinthians, the arch-rivals of Flamengo, the club he has been training with for four months since his contract at AC Milan was terminated.

Rio de Janeiro based sports newspaper Lance called Ronaldo a “phenomenal traitor” mirroring the feelings of many angry fans who burnt Ronaldo shirts outside the Flamengo headquarters. Ronaldo declared nonchantly “I was training with Flamengo for four months and didn’t receive any offer. Corinthians made an offer that will let me continue my career.”

Ronaldo has not played in the Brazilian domestic league since leaving Cruzeiro for PSV Eindhoven in 1994 but is looking forward to his return and a chance to regain his form. Whilst the Flamengo fans destroyed their Ronaldo shirts, in Sao Paulo the news of Ronaldo coming to Corinthians resulted in a rush to the fanshop where fans tried to get their hands on the Corinthians Ronaldo number 9 shirt. 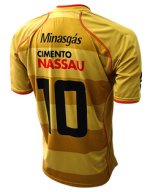 Fellow Brazilian domestic side Sport Club Do Recife released their new golden away shirt which the team will proudly wear during the Copa Libertadores tournament.

The golden shirt for the 2009-2010 season is made by Lotto and was officially presented at the Convention Center of Pernambuco.

The embroidered details are in the official black and red club colours which are said to represent the fighting spirit and the determination of the club’s supporters.

Before Ronaldo made his controversial switch to Corinthians he openly declared the possibility of a move to Manchester City. Notably the ‘richest club in the world’ are aiming to strike a record sponsorship deal with Etihad, the national airline of the United Arab Emirates. Despite remaining in early stages of discussions, an agreement would recognise Man City’s position as the most richly endowed club in the world.

This new agreement could be the biggest of its kind in English football, beating Manchester United’s £56.5m four-year deal with AIG. Etihad, who currently sponsor the Harlequins rugby union team, is run by the Abu Dhabi government and, like Manchester City, is backed by the royal family. Etihad’s links to the Abu Dhabi United Group (ADUG) have established the airline as the front-runners to replace Thomas Cook as shirt sponsors when the current £2.3m-a-year sponsorship deal runs out at the end of the year.

For all the latest shirt news head over to footballshirtculture.com.

Written By
Felipe
More from Felipe
Didier Drogba insists that he and John Terry will play against Manchester...
Read More