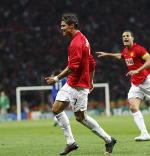 Cristiano Ronaldo will be a Real Madrid player in less than a week after the flying winger agreed six year deal.

His world record £80m move from Manchester United to the Spanish club is due to be completed on 1st July with the Portuguese international being introduced to the media on 6th July.

A statement on United’s web site confirmed that the deal had been finalized while the Madrid club’s web site stated:

The player will be tied to Real Madrid for the next six seasons.

He will be presented on 6th July at the Santiago Bernabeu.

Ronaldo joined United in 2003 from Sporting Lisbon for £12.2m, but was strongly linked with a move to the Spanish capital in the summer of 2008.

United lodged a complaint with world governing body Fifa last June over what they believed was a deliberate attempt by Real to unsettle the winger.