Manchester United have told Real Madrid that no amount is enough to buy Cristiano Ronaldo. 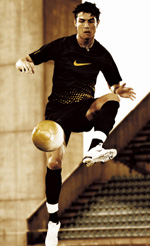 Real Madrid, who are always linked with high profile footballers, have frequently been linked with Ronaldo of late, no doubt due to the scintillating form he has produced for Manchester United this term.

Pedja Mijatovic, Real Madrid’s football director, was in London last week to watch the second leg of the quarter final of the Champions League between Chelsea and Fenerbahçe. While in the country he spoke to a French newspaper, L’Equipe, Pedja revealed to a freelancer of the French newspaper that Real Madrid’s only priority for next season to is to sign Cristiano Ronaldo.

Real Madrid in the football world is one of the most prestigious clubs, therefore we should always have the best players in the world playing for us.

The Portuguese winger, 23 years old, has scored 38 goals so far this season with 28 coming in the Premier league. It’s this form which has led to Manchester United’s assistant manager Carlos Queiroz, countering the statement from Real Madrid.

We would not sell him for 120 million Euros.

You can offer all the money in the world, but there is no amount that can buy him.

Written By
Felipe
More from Felipe
Los Merengues take the Top Spot for the first time since November...
Read More