It’s Wednesday night, Blackburn Rovers are lining up against Manchester United on a cold December night at Old Trafford, and the anticipation of a closely fought Carling Cup quarter final gathers around the ground.

But irrespective of the final result, the team at Sells Goalkeeper Products are watching with a great sense of pride. In the Red corner, Ben Foster – long time Sells endorsee and widely touted potential long-term replacement for Edwin Van Der Sar, as well as potential England #1 – turns out for United in the famous Sells Aqua Wrap goalkeeper gloves. In the blue (and white) corner, Blackburn Rovers’ Paul Robinson, recently converted to Sells, rejuvenated, wearing his new custom Sells goalkeeper gloves, which have been developed according to his exact specifications.

Previous Robinson-Foster duels have been noteworthy for other reasons. In an infamous incident at White Hart Lane in March 2007, Robinson became only the 3rd goalkeeper to score in the Premiership, beating the unfortunate Foster from a free kick off the ground just outside his own box. But this time the attention of the goalkeeping community has been on Robbo’s custom made Sells gloves, and so – you always hear it here first – we bring you a closer look at exactly what the England man is likely to be wearing for the rest of the 2008-09 season. 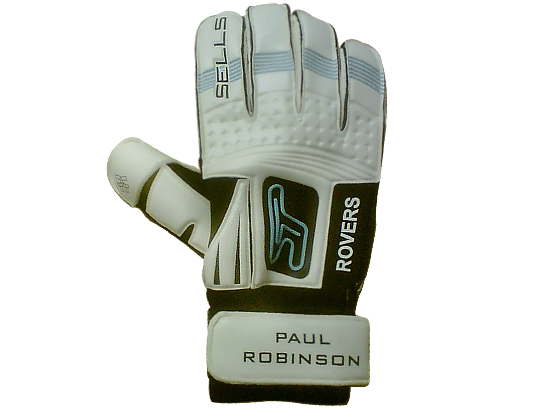 Paul Robinson’s new Sells custom made goalkeeper gloves Not the best image but hot off the press! And another Footy-Boots world exclusive…

So what’s going on here? Well, the Sells Robinson glove started out as the Sells Super 4 Contour d30 goalkeeper glove, as worn in the past by Dudek and Bywater, among others. The d30 glove remains one of the top gloves in the Sells range, and has been a unique and innovative glove in its own right, thanks to its pioneering use of d30 material in the backhand of the glove. The d30 backhand technology essentially means that the gloves incorporate a material designed to harden immediately on impact, providing improved punching abilities without sacrificing the flexibility of the gloves under normal conditions. The Contoured Roll Cut of the glove is also specially designed to better follow the contours of the hand and give an increased latex-to-ball contact area. 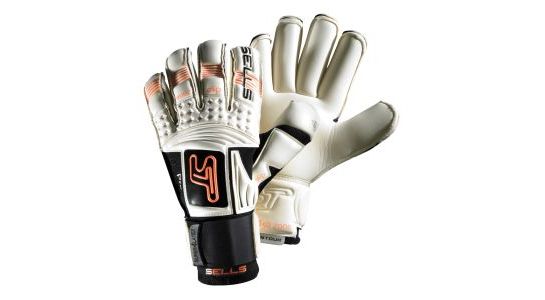 Robinson, so Sells tell us, is a man who knows his goalkeeper gloves. And so, naturally, he is not a man easy to please in that department. The Robinson SMU gloves were painstakingly developed by Sells after repeated testing by Robinson, and gradually tailored, eventually finishing with the unique white and blue visual appearance of the backhand and the highly customised “ROVERS” tab on the outer edge of the gloves.

Most distinctive about the Robinson SMU gloves is the use of two technologies normally found only elsewhere in the Sells range. The latex foam palms, rather than using the Sells Super 4 All Round latex foam, are Sells’ new H2O Ultimate latex – reputedly the best performing latex in wet conditions currently available in the Sells range, and normally found on the (£100.00) Sells Total Contact Exosphere Guard goalkeeper gloves.

Furthermore, the Robinson gloves also include the exclusive Sells Outlast material (a.k.a. “the NASA space material”) in the body of the gloves. The Outlast material was originally developed by NASA to help regulate body temperature and keep it at optimal levels, by adjusting to the temperature to retain excess heat when the hands are warmer, and to release it as the hands cool.

As already one of the most capped goalkeepers ever, Robinson could pretty much take his pick from the top goalkeeping brands. In fact, he attracted comment this season by spending his time at Blackburn auditioning a range of different goalkeeper glove brands, starting the season wearing adidas, for example. But it now seems that it is Sells who have won the day, and secured the commitment of Robinson until at least the end of the season – and quite possibly beyond. Draw your own conclusions…

Written By
Felipe
More from Felipe
Leaked images of the new Chelsea home shirt and a look at...
Read More