Long-time adidas F50 wearer Roberto Soldado became one of Tottenham Hotspur’s many signings set to fill the void after the departure of fellow adiZero-wearer Gareth Bale this summer, and has slotted straight into the new-look Spurs line-up.

Kicking off the season with 4 goals in 11 games, the Spaniard will be hoping to improve on that ratio by the season’s end to make sure of his place in his country’s World Cup squad.

We spoke to him on-set at the adidas Sama pack photo shoot to hear how Spain are still ‘hurting’ after the Confederations Cup, and how he likes the all-new F50. 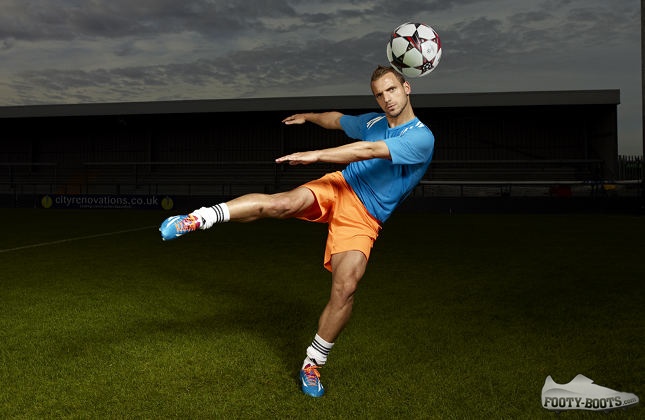 – What do you think of the new F50's you're wearing today?

They're really light and comfortable! The best thing, though is that they adapt to your feet – that's why they feel so comfortable.

– And your thoughts on the colour?'

I love the colour! They're very attention grabbing – you don't think adidas can improve on their boots, but they always do.

– The boot is based around speed, how do you find that helps in your game?

Speed is fundamental to my game, and the weight helps. I also prefer the shape of the F50's, they're very good for striking the ball and basically very good for me and my game.

– After the Confederations Cup, do you think Spain can still go to Brazil and mount a strong challenge?

We're hurting a little bit after what happened in the final; Brazil played a superior game. But, in the World Cup, everyone starts again from zero – we're going to be on our best form and we're not going to let that happen again.

The team of the 2010 World Cup was obviously a very special memory for me and all of Spain, along with the European Championship side from 2008 – I hope we can go on to create a similar memory in 2014.

Written By
Kyle Elliot
More from Kyle Elliot
It's here! The new campaign is merely hours away, and we've got...
Read More