We’re big gamers here at Footy-Boots.com towers, especially Footy games, so when we got asked if we wanted to give the new FIFA Street a whirl, we jumped at the chance.

Well, we say ‘new’ FIFA Street, but this is more of a total re-boot of the Street franchise; gone are the ‘Hyper-Real’ character models, slow-motion wall runs and arcade-y feel of the first three FIFA Streets; in comes something more in line with the exemplary FIFA 12.

Whilst we certainly miss the ludicrous styling and aptly-named ‘GameBreaker’ goals, it doesn’t take more than a couple of quick games with the new generation of Street to know this is the all-around better game.

The presentation of the game uses much of the same character models as FIFA 12, and when entering a match with a a club or national squad you’re given the option of kitting them out in their official team kit, or some more street-style training gear and team-themed apparel – not to mention the adi5 and Nike5 footwear – ensuring the game looks fantastic and oozes authenticity. 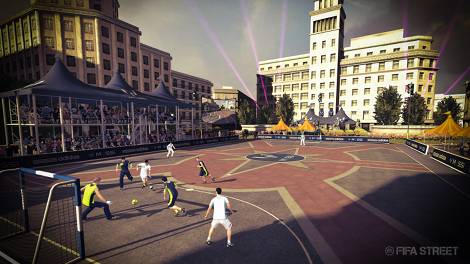 The environments are also a highlight, with a striking variety of day and night settings that capture the dull lights of a car park, the reflective sheen of polished wood in an indoor court, or the artificial green of Astroturf at a 5-a-side centre.

The play-by-play commentary of FIFA 12 is gone, and instead a lively backdrop of chatter from the players and crowds make it’s absence less conspicuous and a nicely varied soundtrack keeps on-court play and in-menu tweaking moving along at a nice rhythm.

Which is something you’ll likely appreciate, as it’s easy to spend a good portion of the game doing one or the other in FIFA Street’s World Tour mode; The addictive fundamentals of playing games, leveling up, buying tricks and even designing a logo will see you heavily invested in the ‘headline’ attraction of FIFA Street, whilst the traveling aspect will see you take in a variety of game types and opponents in what is a gratifying mix of keeping the action fresh and some RPG-lite stat boosting and management. 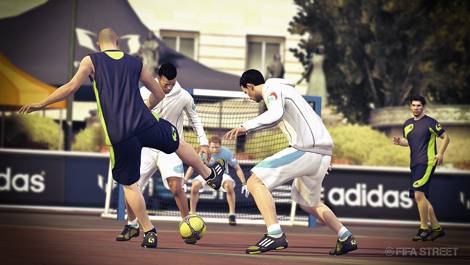 Controls in FIFA Street were always going to be the ‘make-or-break’ factor of the gameplay, and we really have to tip our caps to EA Canada for getting them just right on their latest title.

FIFA Veterans will feel right at home with the face buttons, whilst a the Left Trigger/L2 button now puts your player into Street Close Control mode, where the left thumbstick now has dominion over your players feet, rather their overall movements.

This allows your player to roll the ball away from their opponent, skip to the side by bursting with the Right Trigger/R2 or go for the exuberant ‘Panna’ or ‘Nutmeg’ should the opening be there – and earning massive style points for doing so. 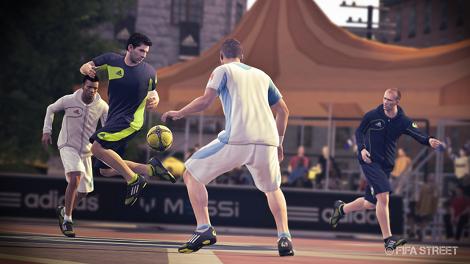 Throw in the Right Bumper/R1 for ‘Air Beats’, and you’ll be Flip-Flapping, Rainbow-Flicking and more with deft skill and fluidity, whilst still being able to dictate the pace with shielding, jockeying and dead-stops.

FIFA Street isn’t without it’s issues, though – with the biggest being team-mate AI. During play, it’s not uncommon to see your team-mates hang back and leave you without an avenue, whilst goalkeepers seem to have a problem with any ball that comes from the corner of pitches without an ‘ins and outs’ rule, and tend to have a bad time with most long-range efforts.

Meanwhile, the camera constantly shifts sideways in what was an effort to presumably allow a focus on the action and prevent wasteful long-shots, instead can leave you without a good indicator of where team-mates are – though this admittedly doesn’t take long to get used to. 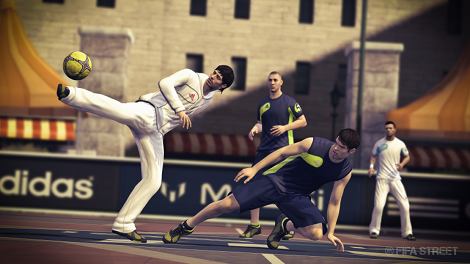 All of this can be forgiven, though, when FIFA Street is at it’s best – multiplayer. A game that was practically born for local and online matches, the game is fast, furious and flamboyant in equal measure, and if you can get three mates around for a few rounds, banter, high-fiving and trash-talk will flow as freely as the football. Guaranteed.

This is a whole new experience for wizened FIFA guru’s and newbies alike, and the perfect title for any football fan to wrap their thumbs around this summer.