The football boot brand’s marketing campaign compares and contrasts the private sides of the Real Madrid goalie and the Barcelona striker with their more recognisable ‘on duty’ personalities.

The Reebok Sprintfit duo unveiled a series of stunning shadow sculptures that depict the opposing on and off-field personas of the world’s leading sport and entertainment icons.

Real Madrid goalkeeper Iker Casillas said: “The sculpture is great. It provides a good insight into my life away from the football pitch. The sculptors have done an excellent job – I can’t believe they’ve managed to create a perfect shadow image of me from all of those different objects. ” 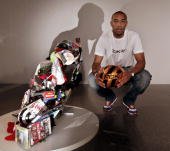 Barcelona striker Thierry Henry added: “The Two People in Everyone campaign shows that you can’t always judge sports people by the way you see them when they’re in action. It’s great to get the opportunity to show another side of our personalities to people.”

Written By
Felipe
More from Felipe
The all new adiPure III has had a facelift. Ahead of its...
Read More