As if the prospect of facing Bayern Munich in a Champions League semi-final wasn’t daunting enough, some of the key members of the Real Madrid squad had to deal with the trauma of having their football boots allegedly stolen ahead of the game. 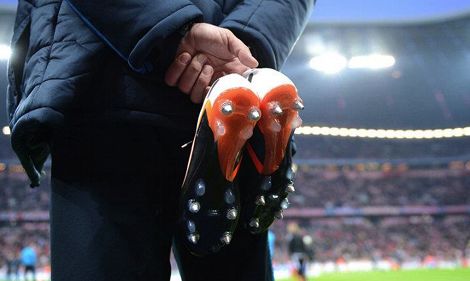 Some time in between arriving at the Allianz Arena and kick-off, reports from Munich say someone looks to have snuck into the Los Blancos changing room and stole several pairs of football boots and jerseys.

Reports from Spanish newspaper Marca suggest that three pairs belonged to superstar Cristiano Ronaldo, whilst an additional three pairs were taken from between Karim Benzema and Mesut Ozil, for a total of six stolen pairs of cleats.

Rumours on Twitter suggested that Ronaldo and Ozil were expected to debut the ‘secondary’ Mercurial Vapor VIII colourway – Sail / Red / Soar – in last night’s match, but the theft forced them to play in the Bright Mango launch version.

Real Madrid went on to lose to Bayern 2-1, thanks to a last-gasp winner from Mario Gomez, but Jose Mourinho’s side do take a precious away goal into next week’s game at the Bernabeu.

Real Madrid have raised a formal complaint with UEFA, but so far no other action has been reported.

Whilst Ozil was at hand to tap in Real Madrid’s goal on the night, Crisitiano Ronaldo and Karim Benzema both looked to be lacking their shooting boots, firing several shots at Manuel Neuer. How much would having your boots go missing ahead of a big game affect you psychologically?