Whilst there might be a lot of transfer uncertainty surrounding Arsenal football club at the moment, young midfielder Aaron Ramsey has sparked a different kind of speculation by wearing some mysterious blacked-out football boots in training.

The Welshman spent the majority of last season wearing the adiPure IV football boots, before making a switch to the adiPower on the last day, presumably, on the request of adidas who asked several young, exciting midfielders like Jack Rodwell and Nani to switch silos to the new Predator.

But perhaps the German brand could yet have further boot-spotting plans for the 20-year-old, who captained his country for the first time earlier this year, after Ramsey was clocked'  wearing a blacked-out pair of football boots at Arsenal’s London Colney training ground.

Our initial reaction was that Ramsay had blacked-out his adiPowers ahead of the weekend’s game – presumably due to his contract being up with adidas – but in further training sessions and Saturday’s match against Liverpool, his boots have been back in full colour – leading us to believe he could well be trialling something new for the Three Stripes.

We know that adidas have several ‘irons in the fire’ when it comes to up-coming football boots, which leaves it open to debate as to what the young Gunner was actually wearing.

As a former adiPure wearer, it’s our favourite theory that he is trying out the upcoming adiPure 11Pro that Bastian Schweinsteiger has been trialling for months now. 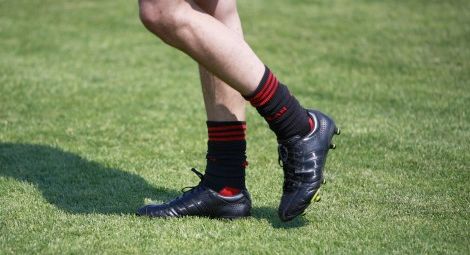 adidas’ latest addition to the adiPure line of football boots look set to defy expectations when they arrive at some unconfirmed point in future, as they are strongly rumoured to contain some miCoach style technology that has never been seen on a boot before!

The other option, of course, is that they are the football boots that many are nicknaming the ‘adiControl’.

Ballack’s unidentified boots, that many fans are calling the ‘adiControl’

We saw these unorthodox cleats on the feet of ex-Germany Captain Michael Ballack earlier this summer, and since then the pictures have caused a storm of interest – with the (completely fan-invented) ‘adiControl’ moniker causing many fans to dub them as adidas’ ‘CTR-killer’ – a step on from the partially-control-focused adiPower, that will provide a more direct competition to Nike’s successful breakout control football boots.

What do you think Ramsay is likely to have been wearing?