Purple football boots are something of a rarity – and it’s easy to see why, it’s a tough colour to use if you want to make a really visually exciting pair of football boots.

But Puma have come good on their fastest ever boots and created a killer new look for the evoSPEED 1.2 with this Blackberry / Orange / Rose colourway.

After a handful of seriously good-looking, understated colourways since their launch at the start of summer, it’s great to finally see the 1.2‘s in a colour that really stands out, without being overly-garish. 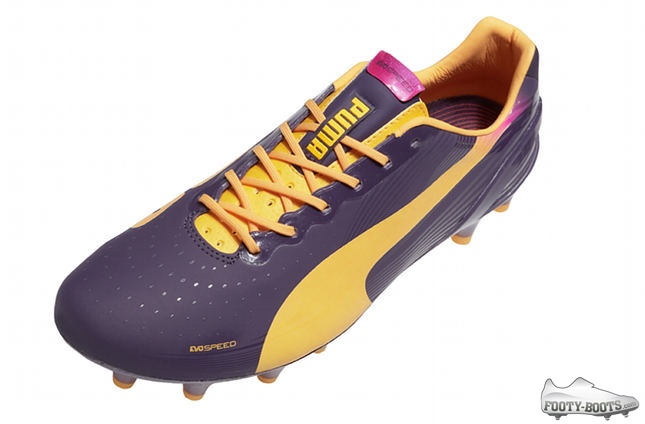 Hoping to give this colourway a stand-out debut will be Manchester City’s Sergio Aguero. The Argentine forward will be lacing up the Purple/Orange Puma evoSPEED 1.2 for Manchester City’s match against Viktoria Plzen tonight in the Champions League.

But hot on Aguero’s heels will be Arsenal’s red-hot striker Olivier Giroud, Gael Clichy, Santi Cazorla and Monaco’s Radamel Falcao, who will all switch to this new colourway later this week.

The evoSPEED 1.2 takes everything that was great about the original evoSPEED 1 and ramps it up a notch, fixing many of the issues with it’s predecessor with clever use of materials and technology.

The upper is now imbued with a leather-grain texture and 3G Griptex ‘dots’, for improved contact on the ball in all conditions, whilst the inner boasts a striking graphic use of the Puma text logo.

The soleplate refines the DuoFlex channels introduced on the original release for a more responsive ride, whilst the Pebax chassis is reenforced with the SpeedTrack core for improved mid-foot stability.

Internally enforced with an EverFit cage for improved lateral support and built on Puma’s award-winning AptoLast for a more natural shape, the evoSPEED 1.2 has a great mix of speed boot technology balanced against some more traditional boot tropes like central lacing and conical studs. 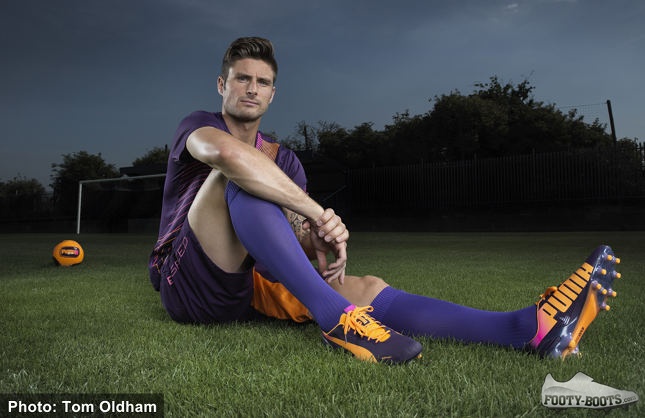 The full collection includes footwear for indoor and outdoor, apparel pieces, goalkeeper gloves and other equipment.

The new evoSPEED products in the purple and orange colourway can be seen on pitch from tonight, and will be available in-store from the 1st of October 2013.