Despite being a complete one-off, these striking Puma prototypes have drawn a huge amount of interest from the football boots community over the past few days.

First appearing on the feet of Sergio Aguero in a training session ahead of the final day of the Premier League, these unorthodox boots have become the subject of much hype since the weekend.

Whilst most boot companies will either provide a black-out or white-out football boot for their players to test ahead of release, Puma have gone for a ‘Dazzle’ pattern, a style of camouflage that has been used on naval vessels, aircraft and cars since the middle of last century.

The reason? The clashing geometric shapes, monochrome colour and lack of distinguishing lines is designed to throw off the human eye, making it hard to decipher where the features of the craft begin and end, along with it’s speed, direction and size.

So, with that in mind, we think Puma have found the perfect weapon in their fight to keep new releases under-wraps from vigilant boot-spotters! 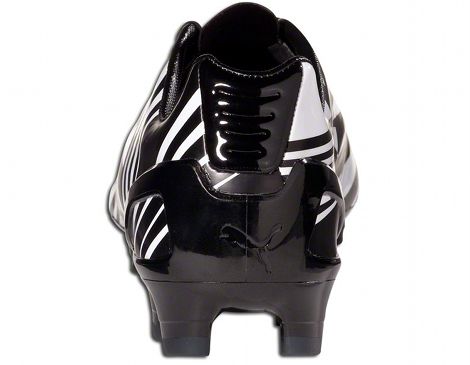 Not only that, but the look is something like nothing we’ve seen on a Puma boot before (though there are a pair of old Sheva Lottos that we can’t help but think of…!) – a striking aesthetic that will definitely appeal to any players looking to bring a bit of extra ‘dazzle’ to their game.

With only 50 pairs available in the US and 50 in the UK, these Puma’s are facing a super-limited run on the shelves, so if you want a pair – you’d better be quick!